Malta has a target: by 2020, 10% of the generation of energy should come from the renewables. Luckily, there is a resource which is available almost every third hour a year—sunshine. Dr Ing. Maurice Apap and Ing. Jurgen Bonavia explain how the solar energy can be harvested. Words by Tuovi Mäkipere.

Sunshine is a big reason why over one million tourists come to Malta every year. These tourists soak up a lot of sun. Their bodies use these rays to produce Vitamin D. On the other hand, photovoltaic (PV) systems convert this solar radiation into electricity. Sunlight is a renewable energy source Malta definitely does not lack.

One third of the Maltese Islands are covered in buildings. If all structures were to install PV systems, a big chunk of the country’s energy needs could be met by renewables. Apart from cloudy days, a major obstacle towards this is the utility grid’s limits, which carries electricity into every home.

Utility grids are traditionally a one-way distribution network from power stations to households. On the other hand, PV
systems supply electricity to a distributed energy generation system, which means they provide energy from households to the grid. Electrical power conversion expert Dr Maurice Apap (Faculty of Engineering, University of Malta) explained that ‘a country’s first PV systems can be handled easily. As the number starts increasing, you have to make sure that the network can deal with them.’

The typical domestic PV system consists of a string of PV cells connected in series. The solar panels in a PV system behave as a DC (direct current) source when exposed to sunlight, whilst the grid supplies AC (alternating current) electricity. DC voltages have a steady value while AC voltages constantly fluctuate in a periodic manner. So the PV system needs an inverter to convert DC into AC current to make it useable for homes.

The inverter ensures that the solar panels deliver the maximum power available at all times depending on lighting conditions and temperature. When the power generated by the PV system exceeds the connected load power within the installation, power is exported to the grid. On the other hand, when the connected power load exceeds the power generated by the PV system, the extra electricity needed is imported from the grid.

The Maltese government encourages PV installations by paying a feed-in tariff for electricity fed into the grid by PV panels. The feed-in tariff ensures that the PV system pays for itself after a number of years. Although, when ‘the consumption tariff exceeds the tariff paid for energy fed into the grid, it may be economically advantageous to integrate energy storage into the PV system in order to reduce energy imported from the grid,’ said Apap. 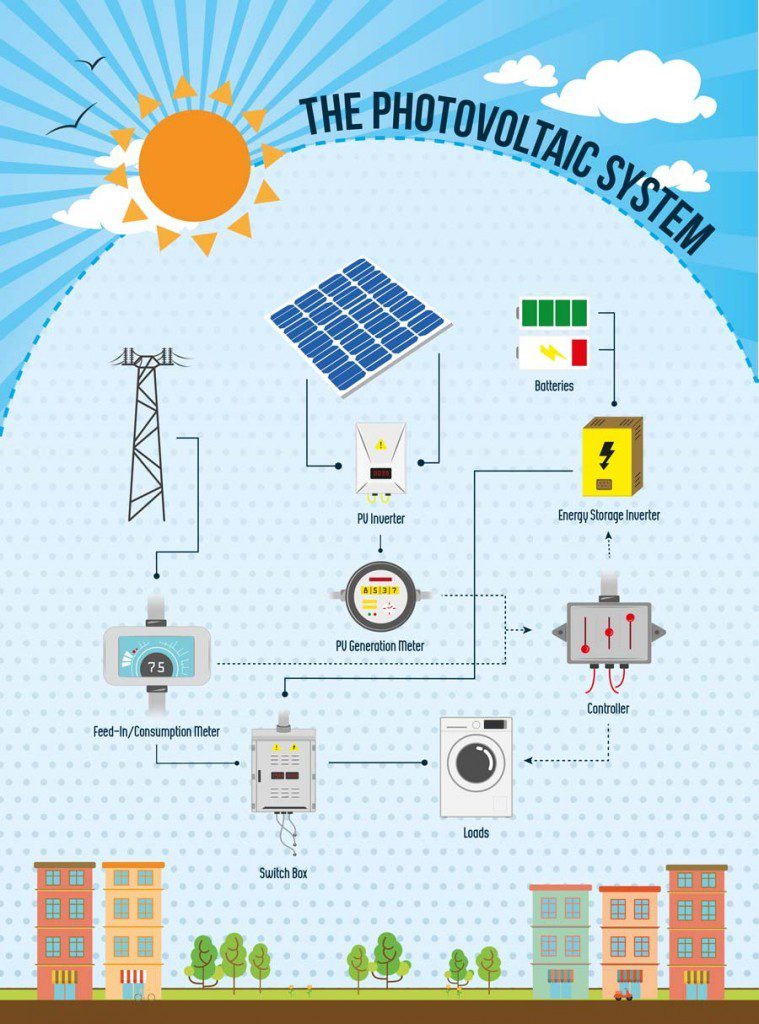 Dark time and other distractions

Malta has around 3,000 hours of sunshine per year. The problem is that there are 8,760 hours in a year; this means that a household with a stand-alone system would be bereft of electricity for over half the time. The issue can only be overcome by storing excess energy generated during the day in batteries to use at night. Storing energy is also important since solar energy peaks during the day when residents are either working or at school. Energy consumption peaks when people come back home in the dark evening hours.

Grid-connected PV systems have some negative impact on the utility grid because the PV panel outputs a large amount of energy at certain times of the day, which can lead to significant voltage fluctuations when a proportion of installations within a neighbourhood alternate between net export of energy by day and net import of energy by night. Energy storage in batteries by day in grid-connected PV systems could mitigate this fluctuation by shifting the generated energy within a household to match the pattern of consuming energy by the family.

Problems do exist. What if a neighbour blocks access to sunlight by building an extra floor? Such questions worry buyers.

Electrical engineering student Jurgen Bonavia is researching how to increase the energy consumed by buildings with grid-connected PV systems. ‘Several households agreed in allowing us to measure their daily energy consumption. This data was used to identify similarities which could then be used in the load management algorithm,’ said Bonavia.

‘Without an algorithm, a load management system would be impossible. The software we developed is continuously monitoring the available power and switching on the electricity loads to increase self-consumption by the household. The goal is to use as much of the available energy when the sun is shining rather than exporting it to the grid.  The algorithm takes care of this task. […] Each and every household with a PV system unknowingly performs some form of self-consumption, the tricky part lies in further increasing this factor since it requires introducing additional parts to the system,’ explained Bonavia. These extra parts include batteries, a load management system with multiple switching devices, energy meters, and a programmable logic controller to send commands to the whole system. Such a setup can be expensive and extend how long it takes for a PV system to pay itself back.

The expense needs to be weighed against the benefits such a system gives. By consuming electricity when produced the PV system’s influence on the grid is reduced. Bonavia has built a test-bed based on computer simulations and preliminary real-world results that can test run a system before its implemented. This simulation can weigh if such a system is needed.

Most households cannot use energy when it is being produced. PV panels produce energy during the day when it is typically needed at night. Storing energy is the ideal solution but cost is a problem. Energy storage converts electrical energy into another form and back again—an expensive and wasteful process. ‘Current batteries are still expensive because of material and production costs. Price depends on the amount of storage required and the type of technology used. Their size plays an important role on the feasibility of the final solution [for a home],’ said Bonavia.

How much energy can domestic PV systems generate? Apap explained, ‘a PV system is normally sized according to the peak power output of the solar panels in the system. If one considers a PV system with 12 panels— a typical system being installed today on terraced houses—its peak energy generation is around 3kWp meaning an average of 4,800 kWh per year.’ 4,800 kWh could keep almost 14 fridges working all year round.

Currently, about 5% of the energy generated in Malta comes from renewable energy sources.”

According to Apap, a PV system’s costs can be recovered in 4–5 years. This payback period and the eventual return on investment depend on whether there are capital subsidies, the feed-in tariff offered, and the duration for which the tariff will apply. Problems do exist. What if a neighbour blocks access to sunlight by building an extra floor? Questions like these worry buyers.

Another issue is the environment and European Union goals. PV panels cut greenhouse gas emissions while the EU is pushing for greater renewable energy source usage. The EU’s Renewable Energy Directive requires the whole ‘EU to fulfil at least 20% of its total energy needs using renewables by 2020’. Every country has its own targets. They ‘range from a low of 10% for Malta to a high of 49% for Sweden’. Currently, about 5% of the energy generated in Malta comes from renewable energy sources.

Renewable energy output in Malta grew by 41% per year between 2003 and 2013 according to Eurostat. Despite this success, Malta’s output remains by far the lowest among the 28 EU member states. This rate of increase in Malta is mostly due to solar energy that accounts for 73% of renewable energy production. The renewable energy mix varies across the EU states because of different environmental conditions. While Malta and Cyprus produce solar energy, mountainous countries, like Croatia, Austria, and Slovenia use hydropower.

Tourists will continue coming to Malta to recharge their inner solar energy batteries under Malta’s greatest renewable energy: sunlight. But in the future, there might be more PV systems on Maltese roofs enjoying the same sunshine. With energy storage solutions, houses can consume the generated energy when needed at night. The right incentives and research can see Malta blaze past its 10% requirement for a very green, solar future.