Assisted conception procedures arose as a type of treatment for infertility. They opened a whole new range of possibilities for couples that were unable to have children due to a variety of problems. Initially, the difficulty addressed was of blocked or absent fallopian tubes in women. This prevented the oocyte from making contact with sperm, hence preventing the formation of an embryo. Naturally, this also prevented an embryo from moving into the uterus, implanting itself, and developing into a foetus.

In vitro fertilisation bypasses tubes by obtaining oocytes from the ovaries and fertilising these oocytes outside the body (in vitro — in glass). The procedure became a reality in humans with the pioneering work of Steptoe and Edwards and the delivery of Louise Brown in 1974. She gave birth naturally in 1999.

“In our society, infertility is becoming more common and 8 out of 10 couples can experience problems”

With the further development of ICSI (Intra cytoplasmic Sperm Injection) it was possible to fertilise an oocyte (egg) with an individual sperm. This was a breakthrough therapy for men with low or absent sperm counts. 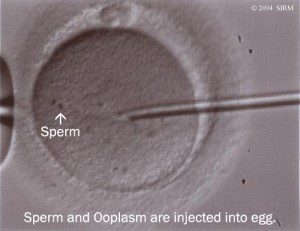 When sperm are lacking in the ejaculate, a doctor can retrieve them directly from the testicles, or the epididymis (a tightly coiled tube from the testes to the rest of the body). The procedure is known as TESA or PESA. In combination with ICSI, these techniques made it possible for these men to father children.

In our society, infertility is becoming more common and 8 out of 10 couples can experience problems. This simple statistic makes these procedures increasingly important. Nowadays, even couples with the most severe problems can become parents.

These procedures have been mixed in controversy from the beginning, with most countries allowing science to proceed within certain safeguards. This restrained approach allows for progress.

Regrettably, infertility still carries a large stigma. The thousands who have benefited from these and other simpler infertility procedures (they precede attempts for assisted conception) do not speak out. Normally they don’t because of how society would perceive them or their children.

IVF is a physically, psychologically, and financially demanding procedure. Couples normally only proceed after having spent a considerable time beforehand seeking help, investigating, and trying alternative simpler treatments. It is usually the final recommended solution to the problem.

IVF essentially means that fertilisation of the oocytes occurs out of the body. The oocytes are then fertilised with sperm and in a percentage of cases this is successful and an embryo starts to develop.

This article continues the focus on IVF from last year’s opinion piece by Prof. Pierre Mallia. Other local experts have been contacted and we are open for further opinions and comments from our readers.