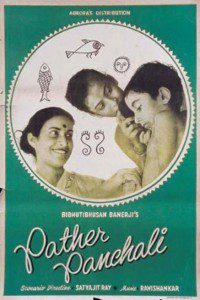 Satyajit Ray’s monumental Pather Panchali deals with an impoverished family in rural Bengal. Maybe monumental isn’t the right word for this humble movie and yet, it is apt because of the film’s intense depiction of human emotions and its towering position in Indian cinema.

This is Satyajit Ray’s first film and the first in a trilogy depicting Apu’s coming of age and a family’s fateful descent into misfortune while the father works in the city. Adapted from Bibhutibhushan Banerji’s novel of the same name, it reproduces many of the episodes from the book. However, it commands pacing, cinematography, and performance which make it a distinguishable work in its own right and a prime example of India’s transcendental take on Italian Neorealist cinema (c. 1944–1952), which was based on serious concerns and social realism.

The director has a keen eye for establishing natural pacing devices—from gathering storms to flitting mosquitoes—accompanied by Ravi Shankar’s sitar music. In a celebrated scene, the mother is unable to communicate to the father that their daughter Durga died from a cold; the mother’s cries are replaced by wailing sitar notes. The shot remains helplessly ‘immobilised’ as the anguished father rises out of the camera’s view, then returns helplessly to it.

The film’s pacing alternates between quiet, domestic chores and vibrant, exterior episodes in which Apu and Durga behave as children do. Much like the source novel and the Mangal-Kāvya poems in Bengali literature (made up of episodic poems called panchali), it is the periodic nature of rural life which drives the film forward. Although it differs from commercial western narratives, with their linear cause-effect plots and clear resolution, the film made its way to western audiences winning the Best Human Document award at the 1956 Cannes Film Festival (among many others).

Of note is the film’s excellent black and white cinematography, which brings out the bright blaze of India’s heat and the silvery tones of the monsoon habitat to crystalline, elemental palpability. The recent Blu-ray release eliminates the ‘ghosting’ effect and muddy transfers of previous VHS or DVD releases.

Finally, one cannot imagine Pather Panchali without the actress Chunibala Devi, who plays the aged widowed aunt. The moment she comes to realise that she is no longer wanted in the household, convinces me that the medium close-up was invented for this moment in film history.

When I met Satyajit Ray’s son in Calcutta, he gifted me with an original poster of the film. A Bollywood producer present in the same room leapt up for it. That poster made it through the monsoon (unlike Durga) and Pather Panchali continues to win hearts across the world. It is in this spirit that this review was written—with the hope that a work from a different time and so close to the human spirit, could become something personal for the readers of THINK.