Malta’s long Mediterranean summers mean that ACs are everyone’s best friend. In a country endowed by sun and wind, renewable energies cannot be an afterthought, yet they are. The UoM’s OWTEP project is creating a cutting-edge solution by combining an offshore wind turbine with a district cooling system. Prof. Ing. Tonio Sant and Dr Ing. Robert N. Farrugia speak to Tuovi Mäkipere.

Unrelenting heat is a thorn in the side of Malta’s electrical infrastructure. In summer the energy peaks substantially as most of the population and their grandmas hit the power button on their AC remote. Cooling is a big deal here, and the electrical demand is massive. Despite this, the country is almost exclusively dependent on fossil fuels and imported electrical energy through the interconnector. This year just 5% of the island’s electricity was generated by renewables; mostly from solar PV panels. Change is needed fast.

Talk of wind farms in Malta has garnered different reactions from politicians and the public, with the government now leaning away from wind power to meet EU 2020 renewable energy targets. Many point to the size of the island, the high population density and the environment as deal breakers, but while the area of some 316 km2 could be a limitation, all this really means is that we need to look beyond our shores. Malta’s renewable energy potential offshore is enormous given the availability of large territorial waters. This was the starting point for Prof. Ing. Tonio Sant (Department of Mechanical  Engineering, Faculty of Engineering, UoM), project leader of the University of Malta’s Offshore Wind and Thermocline Energy Production (OWTEP) project.

The idea is to have floating wind turbines located in deeper waters. The traditional wind turbine foundations as seen in the North Sea would not be viable for far offshore sites due to the deeper sea depths of the Mediterranean. That said, what some might perceive as a geographical disadvantage can actually provide new opportunities. Because solar radiation doesn’t reach beyond a certain depth, known as the thermocline, this means that the deep sea water is colder than the water at the surface—a perfect scenario for cooling buildings on land.

In the OWTEP concept, the wind turbines do not generate electricity, but pump cold, deep seawater through a pipeline to a land-based district cooling plant. This district cooling system would then work to transfer water to the buildings which need cooling. What is unique about this project is that the transfer occurs without electrical power, unlike in traditional wind turbines. The floating turbines would use only hydraulic power. This is all about the ‘hybridisation of renewable energy sources,’ explains Sant.

To understand where to place wind turbines, one needs the construction of a wind-flow model of the Maltese Islands. Enter Dr Ing. Robert N. Farrugia (Institute of Sustainable Energy, UoM) who has done precisely that. His work is important in determining the ideal positioning of the turbines. ‘Wind is site—and height—specific,’ clarifies Farrugia, meaning that wind conditions depend on the site, any unique features of the area, and the fact that wind speeds increase with height. Over several months, measurements were taken from four locations, namely Wied Rini and Aħrax Point in the west and Ħal Far and Bengħajsa in the south of Malta. Sites in the west boasted fairly ‘complex terrain’, reveals Farrugia, while the eastern sites had ‘higher surface roughness and obstacle characteristics.’ By analysing long and short term datasets, Farrugia could make comparisons between the two sitesʼ wind patterns and validates his computer models. Farrugia’s results were used by a Ph.D. student in his research. Ing. Daniel Buhagiar (Department of Mechanical Engineering, Faculty of Engineering, UoM) became involved in the OWTEP project when, as part of his masters, he created an OWTEP turbine simulation. Electric fans use electricity to create an air flow.

Wind turbines work in the opposite way, using wind to rotate their blades and generate electricity. A typical wind turbine consists of the tower, the blades and a hub (rotor), and the nacelle, which is the enclosure on the top of the tower and behind the blades. The tower is typically 25 to 135 metres in height because wind is faster and less turbulent above the Earth’s surface, and the rotor blade diameter usually varies between 20 and 160 metres. The wind turns the rotor blades around an axle. The turbine axle is connected to a generator, which converts the rotational energy into electrical energy. There is usually a gearbox between the rotor and generator which steps up the rotation speed from about 10 to 60 rpm (revolutions per minute) up to between 1,000 and 1,800 rpm. A wind farm can consist of a few or even scores of turbines. The distance between the turbines in a wind farm is usually five to ten times the rotor diameter, to avoid power losses which would occur if the turbines are located too close to each other. To maximise the energy generated, the rotor/nacelle combination is turned automatically to face the direction of the wind. Moreover, the blades can have their angle of attack regulated to maximise energy capture. If the wind speed rises over 25 m/s, the turbine shuts down to avoid unwanted wear of the mechanism.

Buhagiar in now running his Ph.D. research on hydraulic power transmission and offshore energy storage. Instead of modelling a single turbine, he now models groups of turbines working together. ‘Our aim is to have a model of an OWTEP wind farm with different turbine configurations, capable of running simulations, with or without integrated energy storage,’ he remarks.

Energy storage is another aspect worth consideration in wind systems. Being that wind is only available sporadically, energy storage helps with overcome the problem of intermittent supply and continuous demand. With this in mind, Buhagiar developed a novel energy system. The system uses a submerged pressure accumulator and an external floating chamber to stabilise pressure. This can be directly integrated into the OWTEP system to store cold deep sea water. ‘This has a dual advantage,’ maintains Sant, adding that, ‘energy is stored in directly usable form, as pressurised fluid, while also retaining its cold temperature.’ The development of this storage device has recently received funding (FUSION Research and Innovation Technology Program, Malta Council of Science and Technology). This will lead to the development of a proof-of-concept prototype over the next three years.

In traditional electricity-generating turbines, the rotor is mechanically coupled to the electrical generator to directly convert the kinetic energy available into electricity before transmitting to the shore. In the case of the OWTEP turbine, however, the rotor drives a hydraulic pump to pressurise deep sea water, transmitting it to shore through a pipeline before having it converted to electricity via a hydraulic turbine. This convoluted process results in energy loss during conversion, making it less efficient. However, the cold sea water may be used to increase the energy performance efficiency of large-scale cooling processes. This was when M.Sc. student Matthew Galea stepped in.

Galea has developed a mathematical model to analyse the efficiency of an OWTEP system coupled with a large-scale air conditioning plant. According to his study, while the efficiency of air cycle machines is not ideal, this can be increased considerably when these are driven by cold deep sea water supplied by OWTEP turbines under hot and humid climate conditions such as Maltaʼs. the pressure from the turbines, coupled with the availability of cold seawater, is perfect for a hot and humid climate such as Malta’s. 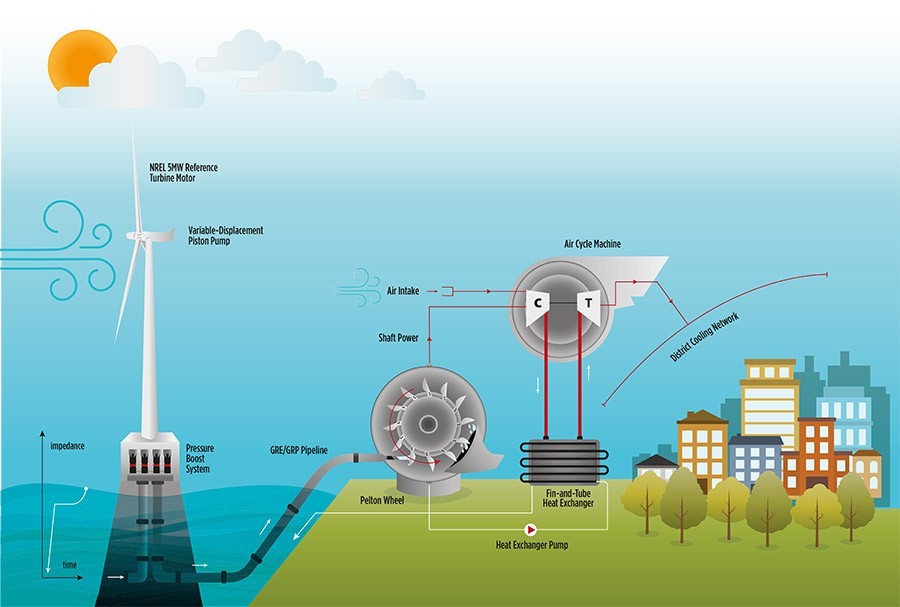 The project is moving along at a fast pace and ‘there is parallel research being conducted right now to commercialise the floating wind turbine technology,’ discloses Sant. In fact, there are already full-scale prototypes in production, with the latest turbine being installed at Fukushima, Japan, by Mitsubishi. However, while the idea of combining the turbine with a district cooling system is already unique, with Malta at the forefront of this venture, the technology behind it can still be improved by integrating other components. The OWTEP project plans to make use of the wind turbine’s floating platform to generate energy. The idea is to install a photovoltaic (PV) system on board. ‘We want to use the same platform to harvest solar energy,’ claims Sant. ‘Integration of technologies is the future,’ he emphasises. The EU’s Renewable Energy Directive has ‘set a binding target of 20% final energy consumption from renewable sources by 2020. To achieve this, EU countries have committed to reaching their own national renewables targets. For Malta, this is 10%, double the current levels. It was found that PV systems could offer 9.1%, onshore wind farms 5.4%, and offshore wind farms 3.4%. There is still a long way to go for Malta to reach these goals and avoid being fined.

That said, the OWTEP concept could be a part of renewable energy generation in Malta. Buhagiar contends that ‘more detailed modelling and prototyping need to be carried out before implementation. We haven’t done any detailed analysis on the materials yet,’ he says. The study is essential to determine costs that are always an issue—a brighter, cleaner, and more energy-efficient future awaits.