Doctors regularly need to use endoscopes to take a peek inside patients and see what is wrong. Their current tools are pretty uncomfortable. Biomedical engineer Ing. Carl Azzopardi writes about a new technology that would involve just swallowing a capsule.

Michael* lay anxiously in his bed, looking up at his hospital room ceiling. ‘Any minute now’, he thought, as he nervously awaited his parents and doctor to return. Michael had been suffering from abdominal pain and cramps for quite some time. The doctors could not figure it out through simple examinations. He could not take it any more. His parents had taken him to a gut specialist, a gastroenterologist, who after asking a few questions, had simply suggested an ‘endoscopy’ to examine what is wrong. Being new to this, Michael had immediately gone home to look it up. The search results did not thrill him.

The word ‘endoscope’ derives from the Greek words ‘endo’, inside, and ‘scope’, to view. Simply put, looking inside  our body using instruments called endoscopes. In 1804, Phillip Bozzini created the first such device. The Lichtleiter, or light conductor, used hollow tubes to reflect light from a candle (or sunlight) onto bodily openings — rudimentary.

Modern endoscopes are light years ahead. Constructed out of sleek, black polyurethane elastometers, they are made up of a flexible ‘tube’ with a camera at the tip. The tubes are flexible to let them wind through our internal piping, optical fibers shine light inside our bodies, and since the instrument is hollow it allows forceps or other instruments to work during the procedure. Two of the more common types of flexible endoscopes used nowadays are called gastroscopes and colonoscopes. These are used to examine your stomach and colon. As expected, they are inserted through your mouth or rectum.

Michael was not comforted by such advancements. He was not enticed by the idea of having a flexible tube passed through his mouth or colon. The door suddenly opened. Michael jerked his head towards the entrance to see his smiling parents enter. Accompanying them was his doctor holding a small capsule. As he handed it over to Michael, he explained what he was about to give him.

Enter capsule endoscopy. Invented in 2000 by an Israeli company, the procedure is simple. The patient just needs to swallow a small capsule. That is it. The patient can go home, the capsule does all the work automatically.

The capsule is equipped with a miniature camera, a battery, and some LEDs. It starts to travel through the patient’s gut. While on its journey it snaps around four to thirty-five images every second. Then it transmits these wirelessly to a receiver strapped around the patient’s waist. Eventually the patient passes out the capsule and on his or her next visit to the hospital, the doctor can download all the images saved on the receiver.

The capsule sounds like simplicity itself. No black tubes going down patients’ internal organs, no anxiety. Unfortunately, the capsule is not perfect.

“The patient just needs to swallow a small capsule. That is it. The patient can go home, the capsule does all the work automatically” 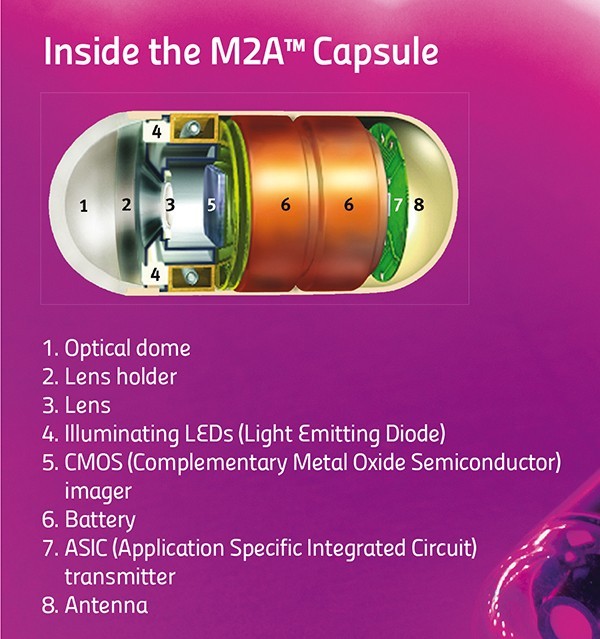 First of all, capsule endoscopy cannot replace flexible endoscopes. The doctors can only use the capsules to diagnose a patient. They can see the pictures and figure out what is wrong, but the capsule has no forceps that allow samples to be taken for analysis in a lab. Flexible endoscopes can also have cauterising probes passed through their hollow channels, which can use heat to burn off dangerous growths. The capsule has no such means. The above features make gastroscopies and colonoscopies the ‘gold standard’ for examining the gut. One glaring limitation remains: flexible endoscopes cannot reach the small intestine, which lies squarely in the middle between the stomach and colon. Capsule endoscopy can examine this part of the digestive tract.

A second issue with capsules is that they cannot be driven around. Capsules have no motors. They tend to go along for the ride with your own bodily movements. The capsule could be pointing in the wrong direction and miss a cancerous growth. So, the next generation of capsules are equipped with two cameras. This minimises the problem but does not solve it completely.

The physical size of the pill makes these limitations hard to overcome. Engineers are finding it tricky to include mechanisms for sampling, treatment, or motion control. On the other hand, solutions to a third problem do exist. This difficulty relates to too much information. The capsule captures around 432,000 images over the 8 hours it snaps away. The doctor then needs to go through nearly all of these images to spot the problematic few. A daunting task that uses up a lot of time, increasing costs, and makes it easier to miss signs of disease.

A smart solution lies in looking at image content. Not all images are useful. A large majority are snapshots of the stomach uselessly churning away, or else of the colon, far down from the site of interest. Doctors usually use capsule endoscopy to check out the small intestine. Medical imaging techniques come in handy at this point to distinguish between the different organs. Over the last year, the Centre for Biomedical Cybernetics (University of Malta) has carried out collaborative research with Cardiff University and Saint James Hospital to develop software which gives doctors just what they need.

Following some discussions between these clinicians and engineers they quickly realised that images of the stomach and large intestine were mostly useless for capsule endoscopes.

Identifying the boundaries of the small intestines and extracting just these images would simplify and speed up screening. The doctor would just look at these images, discarding the rest.

Engineers Carl Azzopardi, Kenneth Camilleri, and Yulia Hicks developed a computer algorithm that could first and foremost tell the difference between digestive organs. An algorithm is a bit of code that performs a specific task, like calculating employees’ paychecks. In this case, the custom program developed uses image-processing techniques to examine certain features of each image, such as colour and texture, and then uses these to determine which organ the capsule is in.

Take colours for instance. The stomach has a largely pinkish hue, the small intestine leans towards yellowish tones, while the colon (unsurprisingly perhaps) changes into a murky green. Such differences can be used to classify the different organs. Additionally, to quickly sort through thousands of images, the images need to be compacted. A specific histogram is used to amplify differences in colour and compress the information. These procedures make it easier and quicker for algorithm image processing.

Texture is another unique organ quality. The small intestine is covered with small finger-like projections called villi. The projections increase the surface area of the organ, improving nutrient absorption into the blood stream. These villi give a particular ‘velvet-like’ texture to the images, and this texture can be singled out using a technique called Local Binary Patterns. This works by comparing each pixel’s intensity to its neighbours’, to determine whether these are larger or smaller in value than its own. For each pixel, a final number is then worked out which gauges whether an edge is present or not (see image).

Classification is the last and most important step in the whole process. At this point the software needs to decide if an image is part of the stomach, small intestine, or large intestine. To help automatically identify images, the program is trained to link the factors described above with the different organ types by being shown a small subset of images. This data is known as the training set. Once trained, the software can then automatically classify new images from different patients on its own. The software developed by the biomedical engineers was tested first by classification based just on colours or texture, then testing both features together. Factoring both in gave the best results.

“The software is still at the research stage. That research needs to be turned into a software package for a hospital’s day-to-day examinations”

After the images have been labeled, the algorithm can draw the boundaries between digestive organs. With the boundaries in place, the specialist can focus on the small intestine. At the press of a button countless hours and cash are saved.

The software is still at the research stage. That research needs to eventually be turned into a software package for a hospital’s day-to-day examinations. In the future, the algorithm could possibly be inserted directly onto the capsule. An intelligent capsule would be born creating a recording process capable of adapting to the needs of the doctor. It would show them just what they want to see.

Ideally the doctor would have it even easier with the software highlighting diseased areas automatically. The researchers at the University of Malta want to start automatically detecting abnormal conditions and pathologies within the digestive tract. For the specialist, it cannot get better than this.

The result? A shorter and more efficient screening process that could turn capsule endoscopy into an easily accessible and routine examination. Shorter specialist screening times would bring down costs in the private sector and lessen the burden on public health systems. Michael would not need to worry any longer; he’d just pop a pill.

* Michael is a fictitious character

The author thanks Prof. Thomas Attard and Joe Garzia. The research work is funded by the Strategic Educational Pathways Scholarship (Malta). The scholarship is part-financed by the European Union — European Social Fund (ESF) under Operational Programme II — Cohesion Policy  2007–2013, ‘Empowering People for More Jobs and a Better Quality of Life’