The Microgame is a buzzword that has exploded over the last year in the board game community. Microgames are video game mini-games but analog and a lot more awesome. Love Letter is the microgame that popularised the format—Kanai’s 16-card wonder.

Love Letter was not the first microgame, it wasn’t even Kanai’s first microgame. R, another game of his was a popular title which you could buy by emailing the designer. He would then mail you an envelope with the cards in it, which was the board game itself. Love Letter is a spiritual successor to ‘R’, and the first of his works to have an international distribution.

In Love Letter you are trying to deliver the proverbial letter to the princess. You do this by gaining the favour of her closest friends. The deck is made up of these people, all having a number. The person who holds the card with the highest number at the end of the round, or the last person standing, wins.

In the game you always keep one card in your hand, and at each turn you draw a card and choose one of the two to discard. Each card though, has a specific ability, which activates as soon as you discard it. For example, if you play a Guard, you have the opportunity to try to guess another player’s card. If you do, that player is out. The Countess for example, cannot be caught with the Prince or the King (you must discard her if she does). This would mean fornication. The Priest can see another player’s card, since this constitutes confession, and the Baron can kick out anyone of a lesser number than him due to politics.

The game takes a little bit of getting used to. It is quite different from other mainstream games but I have not had so much fun with cards since I first found money in birthday cards.

With almost infinite replayability, a price point of around €9, extreme portability, and tight, nail biting moments, Love Letter is a definite buy. There is very little chance of going wrong. Five Stars. 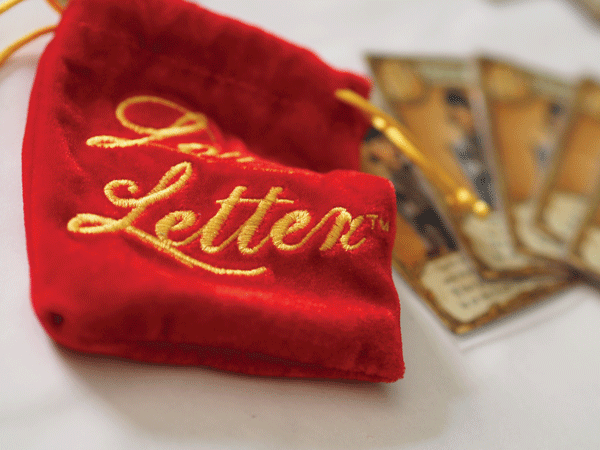