Noel: I recently saw William Lustig’s Maniac (1980) and Franck Khalfoun’s 2012 remake back-to-back. The latter is rather faithful to the original’s spirit. Frank Zito (played by Joe Spinell [1980] and Elijah Wood [2012]) is more of a textbook psychopath, and more brutal in Khalfoun’s film; but still remains faithful to its source.

Krista: I thought the first’s ‘rawness’ was more brutal. The second had a polished style despite the first person perspective. The 1980 film was grittier. 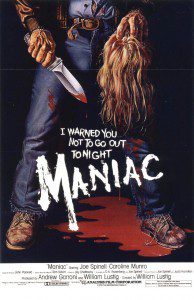 N: True. The remake looks slicker. For instance, the murder scenes are meticulously choreographed, operatic even. Lustig’s film is truer to life, scarier too, because in his lucid moments the killer acts normal.

N: Agree, but it didn’t distract me.

K: I hoped it would be more ‘distracting’. It would have been preferable if the first person perspective had been more defamiliarising, puncturing the viewer’s comfort zone — rather than just being ‘naturalised’.

N: The subjective point of view didn’t help me to get closer to the killer. I only saw this technique being used effectively in Enter the Void (2009). I find it a bit distracting because it can turn into a weird game (Spot the reflection in the mirror!). That said, in Maniac they were well aware of this and tried to have fun with it. The moments when the film veers away from the first person perspective, it sort of clicks into another gear.

K: Good point about the first person perspective being the default here, and the veering away from it becoming a ‘moment’ in itself. It calls to mind Bret Easton Ellis’ book American Psycho (1991).

N: I liked the fact that the remake created a deeper relationship between Frank and the mannequins. They are more than just a manifestation of his childhood trauma — a dysfunctional, promiscuous mother. The restoration of the mannequins is a genuine labour of love which underscores the affection that he nurtures towards the photographer (Anna, played by Nora Arnezeder). She is a mediocre artist unable to hold her camera properly. Frank is the real deal, getting his hands dirty. 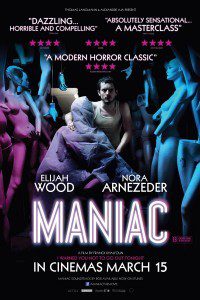 K: That’s a well-noted criticism of the photographer. In the first movie, I couldn’t really ‘judge’ whether she was a good artist or not — there wasn’t a focus on her art, instead they showed the world she moves around in, which made me think she was a budding artist. In the second one she’s portrayed as an underwhelming artist. She tries to use the mannequins to underpin her art and to somehow appropriate his by projecting an image of her face onto their blank heads.

N: Besides Anna, two other victims in Khalfoun’s film are a dancer and an agent. In both murders the director abandons the first person perspective, suggesting that either Frank is seeing his actions as a form of art, or that we, the audience, should see Frank himself as a work of art.

K: Yes, perhaps even perverting the sublime into the brutally grotesque. Yet ‘getting his hands dirty’ is counterpoised by the film’s stylishness.

N: So which is better?

K: Both films ultimately do different things. This is down to stylistic differences, enjoyably the remake doesn’t try to ‘replace’ Lustig’s film.

N: Totally agree. They’re like brothers sharing one (hell of a disturbed)
mother, similar yet so different. •