A home-invasion movie with the possible tag-line ‘they got more than they bargained for’. No, it’s not Home Alone — though you may be forgiven for thinking that.

From part of the team that gave us V/H/S, You’re Next bears Adam Wingard’s trademark playful-violent stamp (think Home Alone’s cartoonish violence, with lethal contraptions thrown in). Wingard makes an appearance in both V/H/S and as himself in his segment for The ABCs of Death (‘Q’); though he doesn’t appear in You’re Next, the latter film incorporates a characteristically self-conscious knowing wink, featuring writer Simon Barrett and fellow film-makers Ti West and Joe Swanberg in supporting roles — Ti West’s Tariq introducing himself as a ‘documentary film-maker’, with high ‘intellectual’ (and short-lived) aspirations.

Adam Wingard self-consciously plays with conventions, without quite overturning expectations. The ‘final girl’ slasher convention is here taken a little further, Sharni Vinson’s Erin is not a scream queen fleeing danger, with a dash of luck on her side, she is resourceful and an equal match for the ‘invaders’. The villains’ usual resistance to death is here transferred to a less likely character, in a ‘why won’t you hurry up and die already?’ moment that is brilliantly played up for comic effect.

Little nods to other home-invasion movies frame particular moments: such as an animal-masked figure — simultaneously disconcertingly jarring and ridiculous — sitting on a couch beside a propped-up dead body in an upper-middle class setting, for a quiet Funny Games pause in the action, with an added cartoonish element.

The generally fast-paced action is spaced out with moments of tension, and an effective balance is struck between the danger trying to penetrate into the space of the family/parents’ home, and the danger already ‘within’.

The ‘home’ itself is a newly-acquired house, territory as unfamiliar to the family and guests as it is to the uninvited invaders — not quite lived in, not quite a ‘home’ yet, just as the family-relations are themselves characterised by awkwardness. While lessening the terror that stems from the violation of a warm and safely welcoming homely space, this accentuates the unsettling absence of refuge for the characters, with vulnerable interior–exterior boundaries.

With two striking exceptions, death scenes were disappointingly standard. The premise and set-up of the movie could easily have led to more inventive devices. You’re Next is slasher, home invasion, and murder mystery, all rolled into one; yet, it remains firmly and respectfully within genre conventions. Nothing wrong with this — I’m not about to make any apologies for a genre I have so much affection for. Yet, there is a lingering sense of an opportunity missed — Wingard’s self-awareness and sense of the ridiculous gives a glimpse for greater potential here restrained. 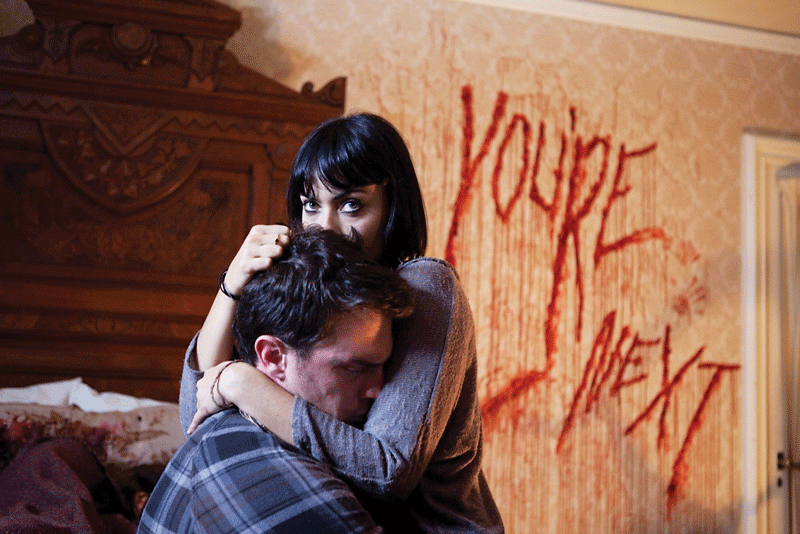