Stuck in the middle with the fumes

Since the 1960s heavy fuel oil (HFO) has reigned supreme as the king of maritime fuels. It was efficient and cheap; its use spread far and wide. International shipping boomed on its success. Even today, this industry handles 90% of the world’s trade volume. For many, HFO is the lifeblood of the maritime shipping industry. But it has a dark side…

Its high sulphur content (3.5%) and damaging byproducts, including soot, aerosols, sulphur dioxide, nitrous oxides, and ozone makes HFO a carcinogenic nightmare. Emission expert James Corbett (University of Delaware) calculates that about 60,000 people worldwide die annually due to the toxic fumes emitted by ships. He also notes that the majority of those deaths come from the coastlines of Europe, East Asia, and South Asia.

Malta’s political arena continues to light up with debate around cleaner energy. Following the last round of elections in 2013, the current government oversaw a shift in energy production, away from coal and oil. Now, with the Delimara power plant in action, the country largely runs on gas, but the HFO problem in shipping failed to even be mentioned.

When considering how the relatively narrow gap between Sicily and Gozo receives a quarter of all the world’s ships passing through, and how the vast majority of them still use HFO, it would seem like a conversation worth having. A team of experts based in a scenic lighthouse in Gozo would certainly agree.

The Giordan Lighthouse (University of Malta – Gozo Campus) is one of the very few still functioning lighthouses in Malta. It is on all the tourist maps out there. But to atmospheric physicist Prof. Raymond Ellul and his team, it is much more than a tourist attraction.

Since the 90s, the lighthouse has played a crucial role in identifying the pollutants around the Maltese Islands. Before then, there was no knowledge or data collected on the subject. ‘It was a black box,’ says Ellul, ‘so even the tiniest of steps was a leap.’

The outfit started with just three instruments, each of them focussed on different molecules; ozone, sulphur dioxide, and carbon monoxide.
Since then, vast upgrades have been made thanks to some well placed funds. Now their repertoire includes analysers for nitrous oxide and aerosols. Aiding the cause are Automatic Identification Systems (AIS) which are now a must on ships thanks to the International Maritime Organization (IMO). This device allows for position trackingand collision avoidance, but its data can also be used for research purposes. By combining it with STEAM, a complex mathematical model borrowed from Finland that assesses Ship Traffic Emissions, the team have now calculated the speed ships are travelling at, the amount of fuel they are using, and the volume of exhaust fumes they are emitting.

Now, with the Delimara power plant in action, the country largely runs on gas, but the HFO problem in shipping failed to even be mentioned.

To put things into perspective, Ellul provided a quick analogy: ‘One big tanker that passes by has an engine of about 80 megawatts. A Maltese power station outputs a maximum of 450 megawatts. So a tanker is a fifth of that. But we get 200 ships of that size passing by Malta like that going through every day! It’s like having a couple of hundred mini-power stations going past every day,’ emitting sulphur dioxide and everything else a power station would emit. ‘We’ve done away with the heavy fuel oil power station, but we still have the ships. We still have big problems,’ he reiterates. The reality is that kilotonnes of fumes are coming over Malta from ships going through the Mediterranean. According to the latest estimates from the group, the 200km square surrounding the country is suffering ‘50.9 kilotonnes of nitrous oxide, 30.3 kilotonnes of sulphur dioxide, three kilotonnes of carbon monoxide, along with a devastating 2080 kilotonnes of carbon dioxide,’ says Saliba, also the Senior Technical Officer at Giordan. 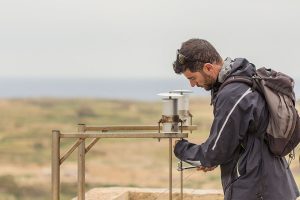 Currently, ships and other marine vehicles are free to use whatever fuel they want in international waters; they’re only required to switch to less harmful fuels when docking in particular European ports. This makes HFO the choice of most thanks to its low price point compared to distilled fuels. ‘The only way to change this,’ says Ellul, ‘is for Mediterranean countries, including those in North Africa, to come together and declare the Mediterranean a SECA.’ SECAs are sea areas where stricter controls are established to lower the level of airborne emissions. Widespread concerns about air pollution have led to the successful adoption of SECA standards in a number of places, including the Baltic Sea and the North Sea. SECAs set the sulfur limit in fuel at 0.1%; normally it is a whopping 3.5%.

We’ve done away with the heavy fuel oil power station, but we still have ships. We still have big problems.

‘The trouble is that maritime transport is big business, and many countries are making a lot of money out of it,’ says Ellul, ‘including Malta.’ Our islands alone have four bunkering areas where ships anchor to refuel and trade fuel. These areas are located just five kilometres from the Maltese coastline. Malta, much like Cyprus, also brings in hefty revenue from ship registration fees. This makes our own government hesitant to move on the issue. Having 23 countries agree to a solution will be a very big challenge. 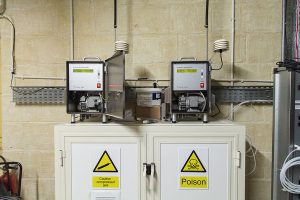 Ellul believes that the move to restrict heavy fuel oil and sulphur emissions ‘can only be achieved through Brussels.’ ‘This is an international situation. You have to have France, Italy, Malta, and all the states in the Eastern Mediterranean agreeing. Their ships would have to switch to either diesel oil, which is a lot cleaner because it doesn’t have sulphur, or liquified natural gas (LNG) which can reduce carbon dioxide and nitrous oxide emissions by 25%, and completely eliminate SO2.’ The catch? ‘It will cost them a lot more,’ Ellul says. But if the Baltics can do it, why can’t we?

While the STEAM predictions may be as good as gold for some, the team has laid out an entire journey that will make the data bulletproof. Saliba says that the next step is to obtain the ship’s tracks from STEAM and put them through another model called WRF-Chem to analyse the dispersion of ship’s pollution across Malta. Saliba expects harbour and shore towns to be receiving the brunt of it, but in total Ellul estimates that we are ‘benefitting’ from about 20% to 30% of the fumes measured.

The results from WRF-Chem will then be compared to actual observations at the Giordan lighthouse. ‘From a technical point of view, this will be absolute proof as to what is happening,’ says Ellul.

Taking things a step further, the team will then work with medical experts to try to see if there is a link between the dispersion of exhaust emissions and locations and rates of disease and adverse health effects. The approach will help determine exactly how many people are suffering because of these toxic fumes.

‘In terms of pollution, these ships are doing more damage than traffic. Traffic pollution doesn’t contain these levels of sulphur,’ Ellul says. And yet most are unaware of the danger. We might not be able to do anything about natural pollutants like Etna and dust events from Africa, but we can do something about the ships.

Public dialogue in developed countries is ramping up about transforming education systems to help students better prepare for their post-academic life. Yet the global business landscape faces severe talent shortages, fuelled by a particular lack of skills – not degrees or certificates.