Dr Nicholas Micallef is fascinated by technology and has an outgoing personality. He recently made a name for himself thanks to his invention of a security app. Veronica Stivala writes about how he fought disappointment and skepticism to reach new heights.

Dr Nicholas Micallef grew up in a family of four and despite his having lived in Scotland for the past six years they have always been a very close family. ‘Our parents always pushed us to study and to do well in school’, Micallef notes, adding how grateful he is knowing that ‘if it wasn’t for their constant support, we would not have made it to University or been so successful in our careers’.

While his twin brother pursued a successful career as a lawyer, Micallef embarked on an academic path: a B.Sc. in Information Technology—Computer Science and Artificial Intelligence (Faculty of ICT, University of Malta) followed by a Ph.D. on phone security and sensors (Interactive and Trustworthy Technologies, (ITT) Glasgow Caledonian University). His research team’s work quickly caught the attention of the media and has been featured on the BBC, New Scientist, and the Daily Mail. In short, they had developed an app which gets to ‘know’ its user and realises if someone else is using the phone. The app has opened up a series of opportunities for Nicholas, but, he reveals, while his fascination for technology has never waned, his ideas were not always well-received and he first experienced a series of disappointing rejections. 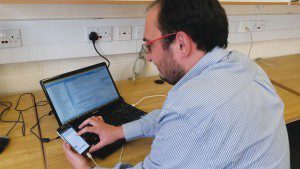 When he was in secondary school learning Computer Studies, Micallef became fascinated with how people interact with tech. ‘At that stage we were taught about the technicalities of computers and we also had our first experiences with programming languages. However, I always felt that there was more to it and that people’s perceptions of technology were quite different to those of the technical people that designed them’, he explains.

The link between people and technology continues to be a thread in Nicholas’s scientific oeuvre. But then Nicholas is a people person. He doesn’t quite fit the bill of the stereotypical, introverted, misanthropist scientist and ‘always likes to meet people. Also’, he adds, ‘I’m always up for a pint’.

In between his degrees, Micallef spent six years as a software engineer. In this position he focused on enhancing and supporting e-commerce solutions. This saw him improving the way computer systems worked, by tailoring them to people’s needs as well as fixing the problems they encountered.

He later took the difficult decision of leaving home for Scotland to read for an M.Sc. in Computer Science (University of Edinburgh), followed by a Ph.D. The decision to leave was fueled by a desire to find new opportunities so when he encountered a plethora of rejections, he was understandably left feeling disappointed.

‘I think the most difficult moments were accepting all the setbacks we encountered when trying to publish our work. We faced fierce criticism from traditional security researchers because our research was redefining the boundaries of the area that they were not open to. In the end   we managed to overcome this problem and published some of the work, but we still have some work which is unpublished’, he notes.

But these reactions all served to make Nicholas a stronger person: ‘at the beginning this was difficult to accept, but as time went by this helped me learn to accept rejections. Also, these situations helped me to look for positive criticism, take it on board, and always continue working hard without giving up.’

And so he did. While at the ITT, he developed the famous mobile app called Ambient Unlocker that ‘watches how you use your phone to build a portrait of your ‘normal’ behavior’ (BBC). To start, he had to first identify the research gap in the field. Followed by throwing himself hook, line, and sinker into mountains of reading and a large amount of analysis, Nicholas identified a lacuna in the protection of phones from unauthorised access.

They first tested the app. They collected three weeks of sensor data from 10 users in an empirical study. Next they ran security studies to understand the strengths and weaknesses of the app. This strengthened the app’s safeguards. Finally, to assess how the app works under real life conditions they conducted a three-week user study on 20 users. Ambient Unlocker was born.

The most rewarding moment came when Micallef was analysing the feedback he had collected from his last user study, because this supplied him with the evidence required to prove that this app can actually improve people’s everyday interaction with technology.

Micallef and his team have discussed how this app could be implemented in our phones. They also plan to have a long-term study of about three months to understand whether using the app over a longer period of time would change users’ perceptions. These discussions are still at an early stage and their feasibility is still being discussed. They are now looking into other uses for the app. He explains, ‘right now, we are mostly interested in researching how it could be used in different health-related scenarios. One example is to find the right time to remind Type 2 diabetes patients to check for foot ulcers and infections, which, if left untreated, could lead to amputations.’

Becoming an expert in improving people’s everyday interactions with technology is Nicholas’s ultimate goal. ‘Eventually, as I start getting more senior positions I expect the focus of my work to shift from implementation and evaluation to designing and defining the overall user experience strategy.’ This means his role will eventually shift from a hands-on role to a more managerial one.

Perhaps one day, we will all be using Micallef’s app to keep thieves at bay or to remind us when to take our medication?