Renewable resources cannot be implemented if the energy they generate cannot be stored. Daniel Buhagiar explains the solution they’re cooking up at the University of Malta.

Try and imagine living without a wallet or a bank account. As soon you get your paycheck, you have to spend it immediately; anything you can’t spend is wasted. Can you imagine how inefficient this would be? How it would limit your growth?

Renewable energy sources face a similar problem, especially large offshore systems. They generate large quantities of energy that have to be used immediately, and since most of the time supply and demand do not match, lots of clean energy is wasted. The greater the use of renewables, the larger the problem stunting the clean energy market.

The solution? Store energy where it is generated, and use it when needed. Use of renewables would then parallel the energy demand, breaking the cycle of wasted resources, and delivering a bevy of benefits to industry, governments, consumers, and ultimately the planet. Producers would be able to sell more energy at lower prices, making it beneficial for them and accessible to consumers. With widespread adoption, governments could meet their green energy targets and consumers and communities would reap the rewards of a cleaner environment.

The trouble with batteries

Batteries have transformed our lives. Consider mobile phones. Yet, while batteries are useful in a million different ways, especially when it comes to smaller applications, the same cannot be said for large-scale multi-megawatt storage. Moreover, current battery technologies often rely on harmful chemicals, lithium-ion in particular, that are notoriously difficult to recycle.

Back in 2014 this problem was at the centre of my postgraduate research. Together with my supervisor, Prof. Tonio Sant, and fellow researcher, Dr Robert Farrugia, we set out to find a storage solution. Cue fluid-based energy storage and compressed air systems.

In normal compressed air storage, the pressure of the system changes all the time, depending on how much charge there is. Think of this as a battery where the voltage is changing all the time. It is not a good idea. So the key challenge with compressed air energy storage systems is keeping the operating pressure stable.

The most notable concepts in the scientific field of energy generation and store were those being developed by MIT, the University of Nottingham, and the Fraunhoffer Institute in Germany. These systems were all designed for the offshore environment and suitable for large-scale storage, but they had one common drawback. The systems utilise hydrostatic pressure at the seabed, meaning the amount of energy stored is dependant on water depth. This  limited their use to areas with very deep water.

After weeks of intensive discussions, and mountains of rolled-up balls of paper, the ‘aha!’ moment arrived, and the Floating Liquid-piston Accumulator using Seawater under Compression (FLASC) was born.

FLASC uses two interconnected chambers, one at the seabed and one at the surface. Initially, both chambers contain a fixed volume of compressed air. To charge the system, electricity is used to pump seawater into the seabed chamber where it displaces the air, some which moves to the surface chamber and is further compressed, basically acting like a spring. To discharge, the pressurised water is released, passing it through a hydraulic turbine to recover the electricity. A stable pressure can be maintained by selecting the right ratio between the volumes of the two chambers, and limiting the volume of water being pumped to the bottom chamber. This configuration becomes particularly interesting when we consider how easily it can be integrated into existing floating platform designs (like offshore wind turbines). The surface chamber is added to the floating platform, contributing stabilising upthrust to keep the platform steady. This way, the seabed chamber can be easily anchored to the seabed or to existing gravity anchor designs.

The concept needed to be proven. The next step was to develop detailed thermodynamic models that would determine FLASC’s potential performance and determine whether it could really be used to store energy. For this, we needed money.

TOSFA is a fund for academics and entrepreneurs who want to either test their concepts or start commercialising existing work. I was sceptical, thinking the project was still too young, but Sant believed we could push the project forward through TOSFA. My doubts were exacerbated when I suffered a bumper-to-bumper accident on my way to the first information meeting! However, we persevered, and the application was eventually submitted. The plan was simple: build a small experimental setup.

A few weeks later we received news that things did not go as planned. We did not get money for the

equipment we wanted, but it was not a sad day for the team. We actually got something better. After listening to Prof. Sant’s pitch, the panel vetting our application decided that it was better to use the money requested to submit a patent and protect the intellectual property (IP). For a team who had not yet realised that
we had something worth protecting, this was amazing news! It also brought us into contact with Andras Havasi, a Knowledge Transfer Executive, who would go on to become a close advisor on aspects of IP and commercialisation.

Work began on the patent, but when the Malta Chamber of Science and Technology (MCST) launched their Fusion Grant, our ambition to build a working system prevailed. We jumped at the opportunity and progressed through many commercialisation stages. Our major snag was in finding the right people to build and deploy FLASC at sea.

After speaking to our colleagues at the KTO, they helped us engage with Medserv plc, a market leader in offshore logistics for the oil and gas industry. With the KTO’s input, we prepared a pitch and presented it to Medserv chairman Anthony Diacono. Diacono took a keen interest in the project and told us that the board would consider it. We anxiously awaited a response, and it arrived a few weeks later—Medserv were in!

“After weeks of intensive discussions, and mountains of rolled-up balls of paper, the “aha!” moment arrived.”

When it all comes together

The collaboration was successfully funded by MCST to the tune of €200,000, money that would see my Ph.D. work transform from thesis into a real product. At this point, I was engaged as a postdoc at the Department of Mechanical Engineering to design the prototype itself, and the UM started working closely with Medserv engineers Thomas Gauci and Jean Marc Pace who were just as enthusiastic about the project as we were. With all this in place, the first FLASC prototype started taking shape.

The process was not without its hiccups. The system required highly specialised equipment, some of which needed to operate underwater. As a team, we pooled all our experience and contacts to source everything. Some additional funding through the UM’s research trust (RIDT) was quickly put to use in developing a system for monitoring the surface temperature of FLASC pressure vessels.

Following this was a modular testing phase at the Institute for Sustainable Energy, graciously hosted by Prof. Luciano Mule’ Stagno. Students Luke Aquilina (MGSS-funded MSc by research) and Daniel Farrugia, contributed greatly to this effort. In the meantime, under Gauci’s direction, Medserv’s highly skilled welders constructed the main sections of the prototype and assembled everything at their facilities.

The prototype has now been deployed at the Dock 1 in Bormla (with the support of Transport Malta, the American University of Malta, and the Bormla local council). The system will be charged using solar photovoltaic panels as opposed to a wind turbine due to the relatively small scale of the set-up. On-board sensors will monitor the temperatures and pressures of the compressed air chambers, along with meteorological data and other system parameters. This data will be fundamental to expanding the current understanding of the system and validating existing computational models. A key aspect of FLASC technology is how it exchanges heat with its surroundings as it charges and discharges, since this affects the efficiency of the system. This will be closely monitored throughout the 18-month testing window. Experimental data will also enable us to explore the application of the FLASC technology to desalination and to the liquefaction of natural gas. Thanks to funding through the Maritime Seed Fund, this work is being undertaken by Dr Federica Maria Strati, the newest member of the FLASC team. 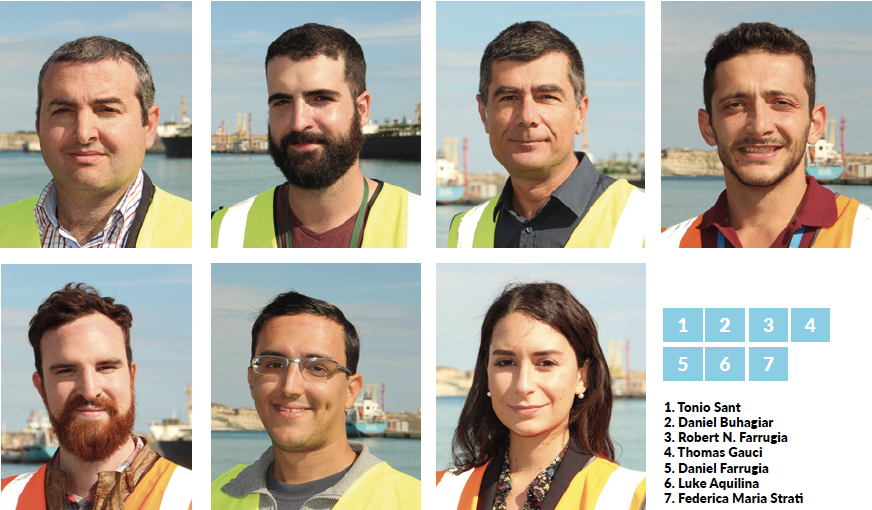 This prototype has built our team’s confidence and credibility to push the project towards a commercial product. Our ambition is to license the technology to offshore systems manufacturers and have them integrate FLASC into their designs. We have already filed patents in the United States, Europe, China, and Japan, so momentum is growing, and we are actively seeking investors and funding opportunities to continue on this journey.

This effort has recently brought us to the PowerUp! regional final in Greece (the biggest regional competition for energy startups in central and eastern Europe) where Sant and myself undertook intensive training in pitching and commercialisation. We went up against seven Greek teams and won, passing through to the European Grand Final, where we will compete to become one of the top energy startups in Europe.

We hope to see our technology applied within the next few years. Our goal is to give offshore renewables a means to store extra energy and allow these systems to better meet demand. Unlocking the problem of storage is key to increasing renewables on the grid, towards a cooler and brighter future for generations to come.

More information on FLASC can be found at:  www.offshoreenergystorage.com