The particle beams circulating in the CERN Large Hadron Collider (LHC) have enough energy to melt 500kg of copper. How can we protect the machine from itself?

My phone rang, waking me up in the middle of the night. It is 2 a.m., and I (Dr Gianluca Valentino) am driving from the sleepy French village where I live at the foot of the snow-capped Jura mountains to the CERN Control Centre. As groggy as I feel, I am trembling with excitement at finally putting months of my work to the test.

The operators on night shift greet me as I come in through the sliding door. These are the men and women who keep the €8 billion Large Hadron Collider (LHC) running smoothly. The LHC produces 600 million particle collisions per second to allow physicists to examine the fundamentals of the universe. Their most recent discovery is the Higgs boson, a fundamental particle. In 2012, this finding appears to have confirmed the Higgs field theory, which describes how other particles have mass. It helps explain the universe around us.

The empty bottles of champagne on the shelves of the CERN Control Centre are a testimony to the work of thousands of physicists, engineers, and computer scientists. The LHC has now busted record after record rising to stratospheric fame.

The LHC is an engineering marvel. A huge circular tunnel 100 m underground and 27 km in circumference. It straddles the Franco-Swiss border and is testimony to the benefit of 50 years of non-military research at CERN, the European Organization for Nuclear Research. CERN is also the birthplace of the World Wide Web.

The LHC works by colliding particles together. In this way physicists can peer into the inner workings of atoms. Two counter-rotating hadron (proton or heavy-ion) beams are accelerated to approach the speed of light using a combination of magnetic and electric fields. A hadron is a particle smaller than atoms, and is made up of several types of quarks, which are fundamental particles (there is nothing smaller than them — for now). The beams circulate at an energy of 7 TeV, which is similar to a French TGV train travelling at 150 km per hour.

For the magnets to work at maximum strength, they need to operate in super-conducting mode. This mode needs the collider to be cooled to -271°C using liquid helium, making it the coldest place in the universe. It is also the hottest place in the universe. Collisions between lead ions have reached temperatures of over 5 trillion °C. Not even supernovae pack this punch.

The two separate beams are brought together and collided at four points where the physics detectors are located. A detector works by gathering all the information generated by the collisions which generate new sub-atomic particles. The detectors track their speed and measure the energy and charge. ‘Gluon fusion’ — when two gluons combine (a type of boson or particle that carries a force) — is the most likely mechanism for Higgs boson production at the LHC. 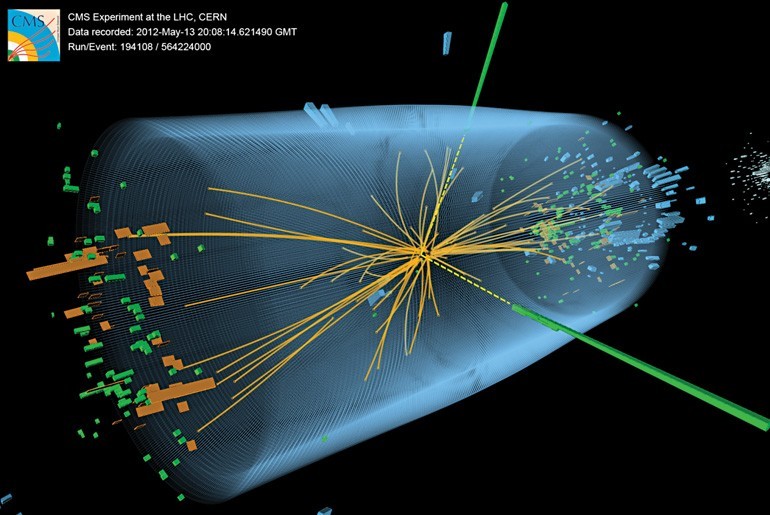 My role in this huge experiment is to calibrate the LHC’s brakes. Consider a simple analogy. A bike’s brakes need to be positioned at
the right distance from the circulating wheel, and are designed to halt a bike in its tracks from a speed of around 70 km/hr. Too far apart, and when the brakes are applied, the bike won’t stop. Too close together, and the bike won’t even move. In the LHC, the particles travel at nearly 300,000 km/s.

Equipment called collimators act as the LHC’s brakes. The LHC is equipped with 86 of them, 43 per beam. They passively intercept particles travelling at the speed of light, which over time drift from the centre outwards. The machine is unprotected if the collimators are placed too far away from the beam. The beam’s energy, equivalent of 80 kg of TNT, would eventually drill a hole needing months or years to repair. If the collimators are too close to the beam they sweep up too many particles, reducing the beam’s particle population and its lifetime.

The LHC has four different types of collimators, which clean the particles over multiple stages in the space of a few hundred metres. These collimators also protect the expensive physics detectors from damage if a beam were to hit them directly. If the detectors were hit the LHC would grind to a halt.

What does it take to calibrate these brakes? Each brake or collimator is made up of two metre-long blocks of carbon composite or tungsten, known as ‘jaws’. The jaws should be positioned symmetrically on either side of the beam, and opened to gaps as small as 3 mm to let the beam through. They can be moved in 5 µm increments— that is 20 times less than the width of a typical human hair. The precision is necessary but makes the procedure very tedious.

The beam’s position and size at each collimator are initially unknown. They are determined through a process called beam-based alignment. During alignment, each jaw is moved in steps towards the beam, until it just scrapes the edge. Equipment near the collimator registers the amount of particles they are mopping up. Then, the beam position is calculated as the average of the aligned jaw positions on either side, while the beam size is determined from the jaw gap.

The problem is that there are 86 collimators. Each one needs to be calibrated making the process painfully slow. To calibrate the jaws manually takes several days, totaling 30 hours of beam time. To top it all, the alignment has to be repeated at various stages of the machine cycle, as the beams shrink with increasing energy, and imperfections in the magnetic fields can lead to changes in the beam’s path. This wasted time costs millions and makes the LHC run slower.

Previously, one had to click using a software application for each jaw movement towards the beam. With a step size of 5 µm and a total potential distance of 10 mm, that is 2000 clicks per collimator jaw! Extreme precision is required when moving the collimator jaws. If the jaw moves too much into the beam, the particle loss rate will exceed a certain threshold, and the beam is automatically extracted from the LHC. A few hours are wasted until the operators get the machine back and the alignment procedure is restarted.

Over the course of my Ph.D., I automated the alignment, speeding it up by developing several algorithms — computer programs that carry out a specific task. The LHC now runs on a feedback loop that automatically moves the jaws into the correct place without scraping away too much beam. The feedback loop enables many collimators to be moved simultaneously, instead of one at a time. A pattern recognition algorithm determines whether the characteristic signal observed when a jaw touches the beam is present or not. This automates what was previously a manual, visual check performed by the operator.

The sun’s rays begin to filter through the CERN Control Centre, and the Jura mountains are resplendent in their morning glory. The procedure is complete: all collimators are aligned in just under 4 hours, the fastest time ever achieved.

In early 2013, the LHC was shut down for a couple of years for important upgrades. Before then my algorithms helped save hundreds of hours; since the LHC costs €150,000 per hour to run, millions of euros were also saved. This software was part of the puzzle to provide more time for the LHC’s physics programme and is now here to stay.

The morning shift crew comes in. The change of guard is performed to keep the machine running 24 hours a day, 7 days a week, while I head home to catch up on lost sleep.

What is a collimator?

How does a particle accelerator work?