Malta is thought to harbour around 6,000 to 8,000 species of insects. In the last two years almost 200 new records of these fascinating creatures were found around the Maltese Islands, and a new endemic species, unique to Malta, was also described as new to science. Jessica Edwards meets up with Dr David Mifsud to find out more about these amazing findings and why insects really do run the world. Photography by Dr Edward Duca.

Insects are mostly thought of as creatures with far too many legs that disturb our sleep and dreams, or often as unwelcome kitchen visitors on hot summer nights, and sometimes as the transmitters of diseases in humans and domestic animals. But with over 1 million named species, they are key to the world we live in. Some insects keep our economy running by pollinating flowers and crops, and by controlling pests that would otherwise devastate crops. Insects eat waste, helping to break it down, while being gobbled up themselves—they are a vital part of the food web. Dr David Mifsud (Institute of Earth Systems, University of Malta) is one of the few people to have dedicated most of his life to studying these beautiful creatures.

Mifsud is passionate about insects, a passion which has been with him since childhood. ‘When I was a small boy I used to spend most of my time in my parents’ garden, looking at ants and woodlice. This probably sparked my love for insects.’ The spark was fanned; his sixth form teacher Guido Lanfranco ‘used to bring boxes full of pinned insects and other animals—I loved them.’ The flames turned into an all-consuming fire with an undergrad and master’s degree in Malta (supervised by David Dandria and Edwin Lanfranco respectively) that led to his first placement on whiteflies on the Maltese Islands. He then flew to Switzerland for his doctorate (supervised by Daniel Burckhardt) managing to revise 30 new species from South East Asia and the African Tropical Region—he hasn’t stopped since. Mifsud is also a workaholic. He has over 150 scientific papers to his name, most on insect research in Malta. He spends a good chunk of the interview showing me how to capture the very small insects found growing on mouldy plant bushes: first, place a white paper underneath the plant, shake it, then collect any insects present using a test-tube, rubber stopper, and pipe. These are then preserved, viewed, and sorted using a microscope. This technique is one of the methods Mifsud uses to collect specimens for identification and for studying various insect groups, varying according to what insects are being collected.

Mifsud has described over fifty new species, eight to ten of which are only found in Malta. One of the most recently described species Mifsud discovered dates back to two years ago. Known as a gall midge, Asphondylia scopuli is an insect that causes pea-like galls to develop in an endemic saltbush plant (Atriplex lanfrancoi) found on seaside cliffs. To date, he has managed to provide original information on around 1,800 different species of insects.

So how has he managed to do it? In order to identify species, field samples need to be gathered. With some groups of species, keys (a tool used to identify species according to distinguishing characteristics by a process of elimination) can be used. With other insects, when little is known about them, specimens are compared to those found in museums. Mifsud explains that, ‘usually you would need to collaborate with scientists abroad since they have access to museums, material, and can compare with actual specimens.’ In Malta, things are not as simple since information and infrastructure are limited. The situation is much better now than 30 years ago and he manages to attract around one to two university students per year to work with him. 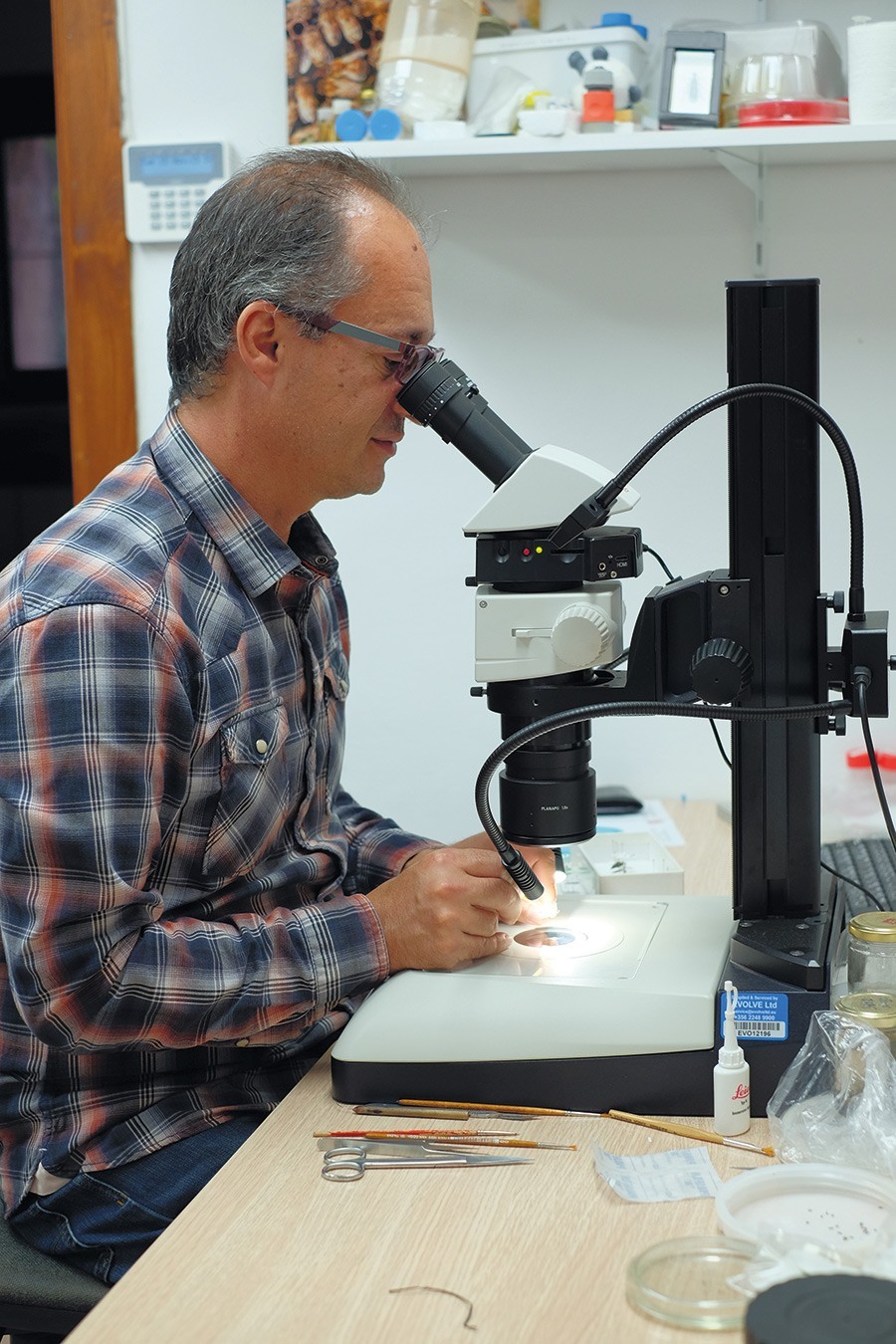 “Mifsud has described over fifty new species, eight to ten of which are only found in Malta.”

One of the many species identified in Mifsud’s field samples is a booklouse (Peripsocus stagnivagus) which reproduces asexually. The offspring normally develop from unfertilised eggs—no men allowed—a mechanism known as parthenogenesis. Parthenogenesis is advantageous when it is difficult to find a mate. Another benefit is that the parent passes on all of their genes to their offspring instead of half of them. Since the offspring produced asexually are clones of the mother, males are very rare. Peripsocus stagnivagus has been known under many different names in the new world and in the Palaearctic (a habitat type found in Malta). The discovery of the first male specimen in Verdala Palace in Malta proved that they were the same species that had spread around the world. Mifsud collected over 2,000 insect specimens to find that very rare male that was key to unlocking this puzzle. Booklice were previously unknown in Malta, and now research has led to the discovery of 30 different species locally.

Those that feed on plants

Most insects live on plants. Many feed on them (known as phytophagous). These relationships seem to have co-evolved, with both needing the other to survive. An example of positive co-evolution between plants and insects is seen in plants that have developed brightly coloured flowers to attract bees. The bees fly from one flower to the other, gathering pollen but also pollinating the flower. Both the plant and the bee need each other to survive; the plant needs the bee to be fertilised and the bee needs the pollen from the flower for food. On the other hand, negative co-evolution occurs because the plants develop new strategies to fend off parasitic insects. In turn, the insects develop new strategies to keep surviving and reproducing on the plants. This drives the evolution of the plants—only those plants and insects with new strategies survive, the rest die off. 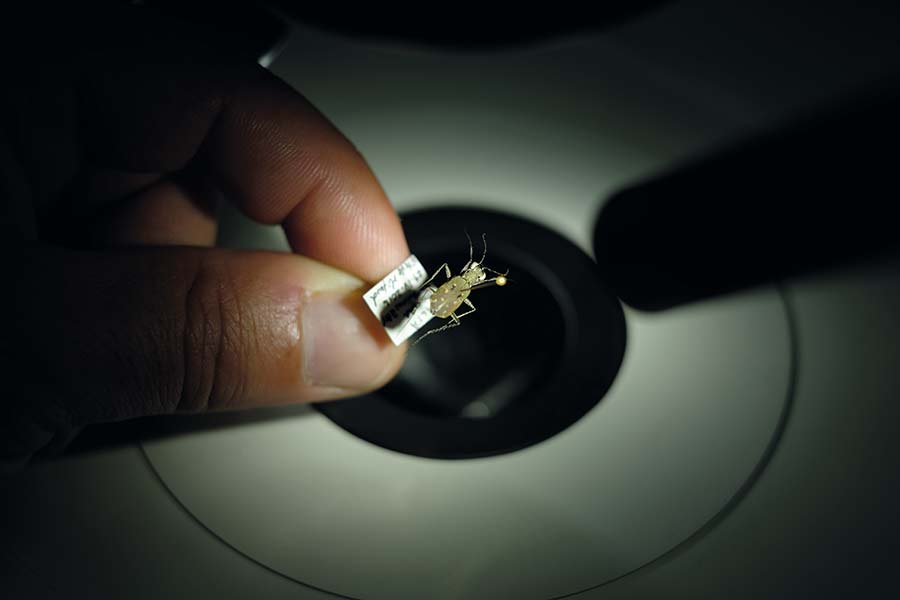 As a reaction to parasitic infection, plants produce abnormal growths called galls. These galls have similar properties to cancerous growths in humans. These galls are usually induced by organisms such as insects, mites, fungi, bacteria, viruses, or nematodes. Mifsud has been studying plant galls in Malta for these last fifteen years. So far, more than 120 different galls have been identified and others are still being discovered. Most of the insect-related research that happens in Malta is published in the journal of the Entomological Society of Malta which has just released the eighth volume of its bulletin. In these eight years, Mifsud has managed to gather over ninety scientists from all over the world to work on Maltese insects. Together, they have generated over 130 peer-reviewed papers, placing Malta and its insects on the scientific map. Together with another twenty partners from across Europe, Mifsud is also currently working on a bee conservation project called Smart Bees. The main aim of this project is to revive indigenous European subspecies of bees, including the Maltese bee, Apis mellifera ruttneri. Bees have a great economic importance because of their role as the main pollinators of various agricultural crops and flowers. Bees are worth billions.

Apart from their economic worth, insects are vital to safeguard nature. While there are only around 1,000 vascular plants, 25 breeding birds, ten mammals, few reptiles, and two amphibians in Malta, there are thousands of insects. Without knowledge of insects it is impossible to understand the environment including maintaining farmland and nature reserves. Basic knowledge about the nature around us and the species within it is critical not only to preserve it but also to create wealth from it. Such research allows for a better understanding of the interactions between the different species found and their environmental impact. Mifsud’s final comment is that ‘what we know so far is just a tip of the iceberg and many more things are still unknown!’