As the beginning of Valletta’s term as European Capital of Culture draws ever closer, stakeholders in the tourism industry are increasingly excited about the opportunities the title will bring for Malta. Despite the economy’s diversification, tourism remains its backbone, and there is a hope that the throngs of new visitors Valletta 2018 will attract will drive income to hotels, restaurants, bars, pubs, shops, and more. It is a buzz that is all too familiar to Nicolas Détrie, born and bred in Marseille. ‘When the news broke that Marseille would be the European Capital of Culture in 2013, there was a kind of frenzy about the income that it would generate for touristic operators. But we saw it as something more—a fantastic opportunity for Marseille to showcase not just its hospitality, but also its creativity.’

The idea of combining these two elements led to the foundation of Yes We Camp, a non-profit organisation which brought together professionals from various walks of life to create new or repurposed transient spaces within the framework of the city. ‘We had the idea of a place that would be open all summer long, seven days a week, gathering visitors, artists, neighbours, and tourists,’ Nicolas, the organisation’s founder and director, explains. 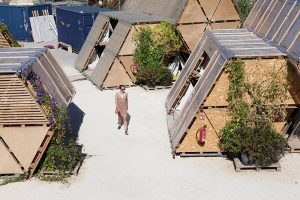 The first project was what Nicolas describes as ‘an artistic campsite’, seeing tourists housed in modules designed by artists who formed part of the collective. ‘We had room for artistic residencies, sports activities, music, shows, and food and bar services. The sanitary facilities on the campsite were ecological prototypes like solar showers with phytosanitation.’ The whole endeavour was driven by a community of like-minded people. This was a project with no funding, realised in a collective way, with the help of hundreds of volunteers. Smaller projects followed. One included the use of customised caravans to support local initiatives with specific skills and tools—from creating a local radio station to setting up outdoor cinemas, or even creating a pop-up kitchen in social housing. ‘The way we intervene can be different, but the objective is always to surprise people and get them involved, in a festive and family-friendly atmosphere, through our creativity,’ notes Nicolas.

Yes We Camp’s current large-scale project is Les Grands Voisins (The Great Neighbours), the occupation of a former hospital in the middle of Paris, which the organisation is sharing with a number of other non-profit organisations. ‘This project provides emergency housing for 600 people, cheap working spaces for craftspersons and small companies, and many facilities for local people and other citizens, including a sports ground, a steam bath, a campsite, a gallery, and so on. When working with vulnerable people, our role is to create an intermediate space, different from their daily spaces but also different from the fast, brutal merchant spaces that are typical of mainstream urban life. We encourage everyone to get involved, bringing innovative opportunities through shared work and the creation of a new kind of urban park. We aim to show that it is possible to create a space with multiple uses for the common good of everyone.’

This is certainly an appealing prospect to consider for Malta as one of the most densely-populated countries in the world. The cramped situation of the island is worsened by an excruciatingly  high number of vacant properties—226 for every square kilometre—the highest in Europe. The social repercussions of leaving vast quantities of properties abandoned and disused need little elaboration. The inflation of property prices, the encroachment on fresh lands for new developments instead of repurposing old ones, the creation of an unsafe and unpleasant environment—these are all headline-grabbing topics of late in Malta. All this begs the question: Can Yes We Camp’s projects cohere with the more permanent infrastructure and social fabric of the cities they take
place in?

Although ephemerality is a key concept in Yes We Camp’s projects, Nicolas believes that the projects can also have a long-term impact.

‘Before we take action in a new place, we first take time to listen, to understand the context and figure out what the needs of the community really are. Then we do our best to create something, ignite a feeling of possibility which will then hopefully spread far beyond where it started from. People are not always able to manage a building or a vacant space, but if they are offered the possibility to get involved and contribute, they will,’ reflects Nicolas. ‘We strongly believe in concomitance. We do our best to attract different social groups and make them first cohabit, and maybe mix or at least get to know each other. We like to feel that we are catalysts for this kind of social action.’

Although ephemerality is a key concept in Yes We Camp’s projects, Nicolas believes that the projects can also have a long-term impact. ‘Being constrained to a short time-frame gives us the freedom to experiment and innovate. We have to be low-tech, low-cost, use the resources close at hand, involve local communities and their skills, and last but not least, have fun! By doing so, we try to collectively prove that with just a little creativity and heart, you can change a lot—and that’s the longest-lasting impact we’d like to leave on society.’