With every particle collision in the ALICE experiment, a terabyte of data per second is generated for analysis. But not all of it is essential information. David Reuben Grech speaks to Dr Gianluca Valentino and Dr Johann A. Briffa about their work in separating the wheat from the chaff and removing noise from two of ALICE’s 18 subdetectors.

Dr Gianluca Valentino and CERN have a history. It started in 2010 during Valentino’s Ph.D. years at the University of Malta. At the time, his research focused on collimators within the Large Hadron Collider (LHC), devices that work in unison to narrow a beam of particles prior to collision. Valentino developed a technique that automatically aligned the 100 collimators to the LHC beam with impressive accuracy, so much so that it shaved off hundreds of hours in beam time in the experiments conducted. In fact, the software Valentino developed continues to be used regularly at the CERN control centre.

Valentino followed his Ph.D. up with a Marie Curie postdoctoral fellowship. Later, he also started lecturing at the University of Malta (UoM). However, his ties with CERN remain strong. Valentino is still a Visiting Scientist and, together with other academics, has worked to give many more students the opportunity to experience this world-class centre of research and innovation. The result has been numerous collaborations between CERN and the UoM. His most notable link? 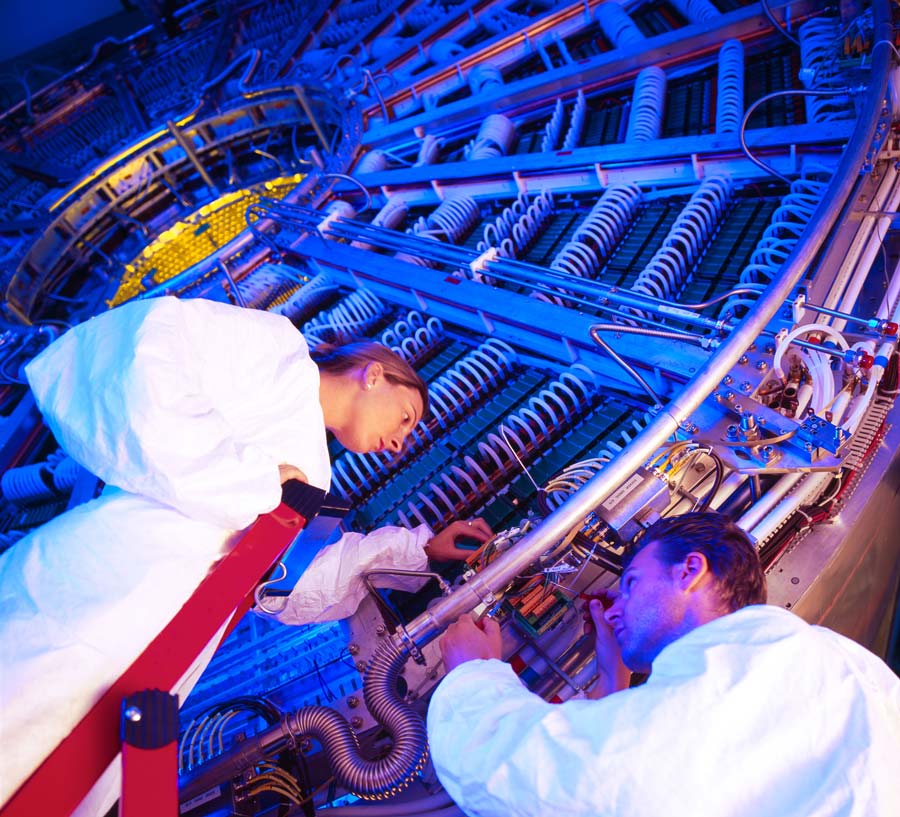 One of the largest of seven experiments in the LHC, ALICE creates collisions between lead ions that momentarily generate quark-gluon plasma, thought to be the state of matter a fraction of a second after the Big Bang. The data generated by these collisions is picked up by 18 different subdetectors. Valentino is currently working with Dr Johann A. Briffa (Department of Communications & Computer Engineering) on two of those subdetectors—the Time Projection Chamber (TPC) and the High Momentum Particle Identification (HMPID)—to detect, track and identify the particles generated by the collision.

The TPC is a barrel-shaped three-dimensional detector. When particles collide in the middle of this barrel, new ones form, spiralling out from this point. These spirals hit the detector’s plates and information is registered. The problem is that not all the particles produced from the collision are important. The TPC scientists at CERN are interested in high-momentum events, consisting of large three dimensional spirals or helices composed of electrons. Low momentum events, also called ‘background events’, are characterised by smaller spirals which obscure what is important. These events need to be filtered out to leave behind the Higgs Bosons of the world.

Valentino and Briffa have developed a density-based scan algorithm that can identify clusters close to each other and tag them, thus creating a better way to clean up data before it has been processed, speeding up calculations for the TPC. For the Helix identification, Briffa also developed a three-dimensional algorithm based on the Circular Hough Transform, a technique used to identify circles.

Following the clean-up, the next step in Valentino and Briffa’s process would be to compress the data given. The team aims to achieve a compression factor of five, meaning that data would be compressed five times over, making it considerably easier to process and store. ‘Instead of taking months to analyse data we want it to take weeks or even days,’ says Valentino.

The other detector under Valentino and Briffa’s care is the HMPID. Separate to the TPC, this machine’s purpose is to identify the type of the particle produced by the collision based on its momentum. Its structure consists of seven plates shaped in the form of chambers. When a particle hits a plate, it passes through a liquid (C6F14 or tetradecafluorohexane). This triggers an incident called a Cherenkov Effect where the particle moves through the layer of liquid, producing Cherenkov electrons. These electrons form a pattern which can be detected by another plate at the bottom. If this pattern is an ellipse, that would indicate that the electron shower came in at an angle, called the Cherenkov Angle that can be used to determine the particle that produced it.

“Valentino and Briffa have developed a density-based scan algorithm that can identify clusters close to each other and tag them, thus creating a better way to clean data up before it has been processed, speeding up calculations for the TPC.”

Briffa and Valentino are currently working on a variant of the Circular Hough Transform which is less susceptible to the large amount of noise which appears in lead ion particle collisions.

To clarify the differences between the two detectors, the TPC gives three-dimensional data in the form of helices. In the case of the HMPID, the result is simply an ellipse and the angle extracted once the ellipse is fitted to the data. An important point to note is that the TPC is not really a particle identification detector as is the HMPID. So the collision which happens inside the TPC sends the particles outwards and the tracking information and the three-dimensional x-y-z coordinates can be detected as the particles are coming out of the TPC. ‘This three-dimensional information can then be transported to another detector like HMPID to match a particle coming out from the TPC to the same particle entering the HMPID,’ says Dr Valentino. So, using the Cherenkov Angle to determine its momentum and the 3D tracking data from the TPC, the type of particle can be determined. 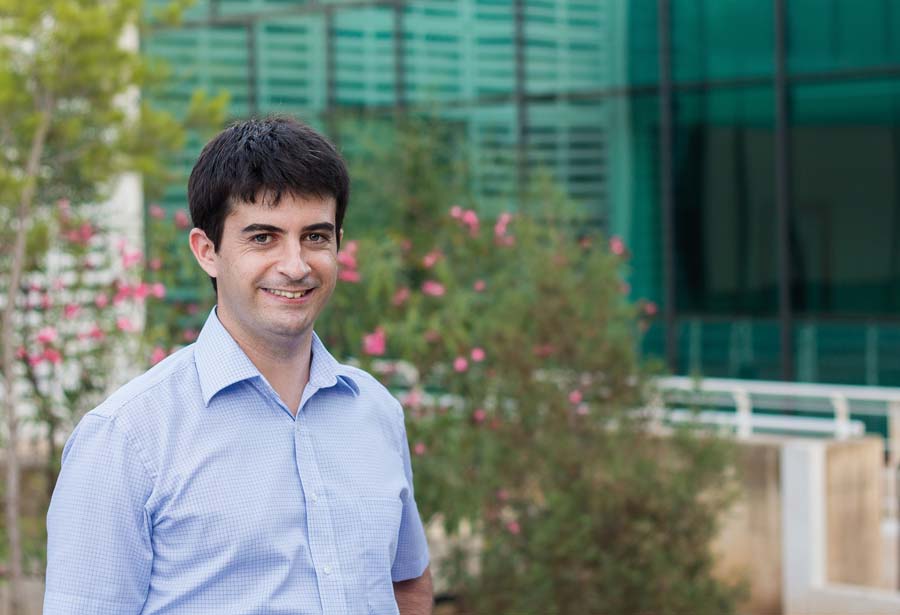 Besides the research related to optimisation of particle event reconstruction, Valentino is also involved in the ALICE-LHC Interface Project, which handles the complex interaction between the detector and the Large Hadron Collider. It is responsible for processing beam instrumentation data coming from the LHC, and also removing the beam from the machine in case serious conditions are encountered. Together with scientists from the Istituto Nazionale di Fisca Nucleare in Bari, Italy, he has developed an automatic algorithm to achieve the desired rate of particle collisions in ALICE through a procedure called luminosity levelling. The procedure involves moving the two colliding beams in steps of a few micrometers (less than the width of a human hair) every few seconds. The automatic procedure has been used in the daily operation of the LHC since July 2016. Currently, an upgrade program is being designed for ALICE’s computer system which will be installed from 2019 to 2021, meaning that the LHC will start providing more data at a higher luminosity, or rate of collisions in the collider. Additionally, the ALICE experiment has launched the Online-Offline (O2) Computing Project.

This is where Malta is involved as more manpower, computation, and technical skills are needed. When Valentino started to set up this collaboration, his application was embraced by both camps: the UoM’s Rector and the ALICE collaboration. Valentino states that the people at CERN definitely saw potential in the expertise provided by the people in Malta. The solid communication links among researchers and the remote nature of the work on this large scale project makes the UoM the perfect partner.

When asked what inspires him, Valentino said that his drive was to improve the UoM’s profile. Maintaining his strong links with CERN is the perfect way to do this. ‘It’s a very scientifically rich environment and there’s a lot of interesting stuff going on, so I wanted to take some of this back with me to Malta.’ He also hopes that through these and future collaborations, Malta will continue to be at the forefront of all the exciting and varied research and development challenges at CERN.