A Green Future for Electrical Networks

Malta can lead EU countries to become the first green island in the Mediterranean with 100% renewable energy.  Dr Alexander Micallef, Prof Ing. Cyril Spiteri Staines and Prof. Maurice Apap tell us more about how Malta could do it.

Malta’s size and location have shaped the island’s fate since time immemorial. Wars were waged for control over Malta; wars were won thanks to its aid. Centuries later, Malta’s geography continues to hold just as much importance, if for different reasons altogether.

When testing new ideas, it is wise to start small. Malta’s miniscule size, combined with its population and vehicle density, makes it the perfect petri dish for cutting-edge development and implementation of widespread renewable energy solutions. In fact, Malta could lead other EU countries, making it the first green island in the Mediterranean, with 100% renewable energy penetration. However, our current national targets are much less ambitious.

All EU countries are legally bound to produce at least 20% of their total energy through renewable energy sources by 2020. Some countries like Sweden are also working under their own steam, setting the bar high and aiming for 49%. Malta’s goals, however, fall disappointingly short, with a target of just 10%. And if that wasn’t enough, doubt is also being shed on whether we can even reach that. Change has to happen.

Malta faces unique energy challenges with its dependency on fossil fuels for both electricity and transportation. And while the potential of solar and off shore wind energy is huge for the Maltese islands, identifying how to integrate a variety of renewables and energy storage systems into its energy mix is difficult.

At its peak in August 2017 Malta’s electrical energy demand hit 460 MW. Presently this demand is met through three different sources: the gas power station in Delimara, the recently completed Malta-Sicily Interconnector, and a selection of renewables.

The presence of the interconnector improves the security and reliability of the local grid; however, it also means that the necessary diversification of the energy supply is being outsourced to Italy.

In 2016 renewable energy production accounted for a mere 5% of the total energy generation, mostly from small-scale domestic and industrial PV installations, though it should be noted that the government is now building its first solar energy farm

The stability of an electrical grid is maintained through a delicate balance between supply and demand, between energy generation and the electrical loads connected to it. A large renewable energy supply could compromise stability due to the intermittency of the energy generated—there is no solar power at night! Simply increasing the number of renewable energy sources without an overhaul of the whole grid, known as the ‘fit and forget’ approach, can have a slew of problems.

The electrical grid needs to be modernised using ‘smart’ tech. This technology communicates between its different points, allowing for more efficient delivery and reliability. It not only reduces common problems like power cuts, but also allows people to better manage their own energy consumption and costs because they have easier access to their own data. Utilities benefit from a modernised grid through improved security, reduced peak loads, increased integration of renewables, and lower operational costs.

Malta has already taken a step in the right direction by introducing smart meters to its grid, helping match electricity generation and demand. They provide an important link with an information and communications technology infrastructure. However, we are still a long way from unlocking a real ‘smart grid’s’ true potential. Technologies such as the Internet of Things (IoT) have the potential to revolutionise our lives through efficient management of connected appliances through the use of online portals, smart plugs, and smart meters. 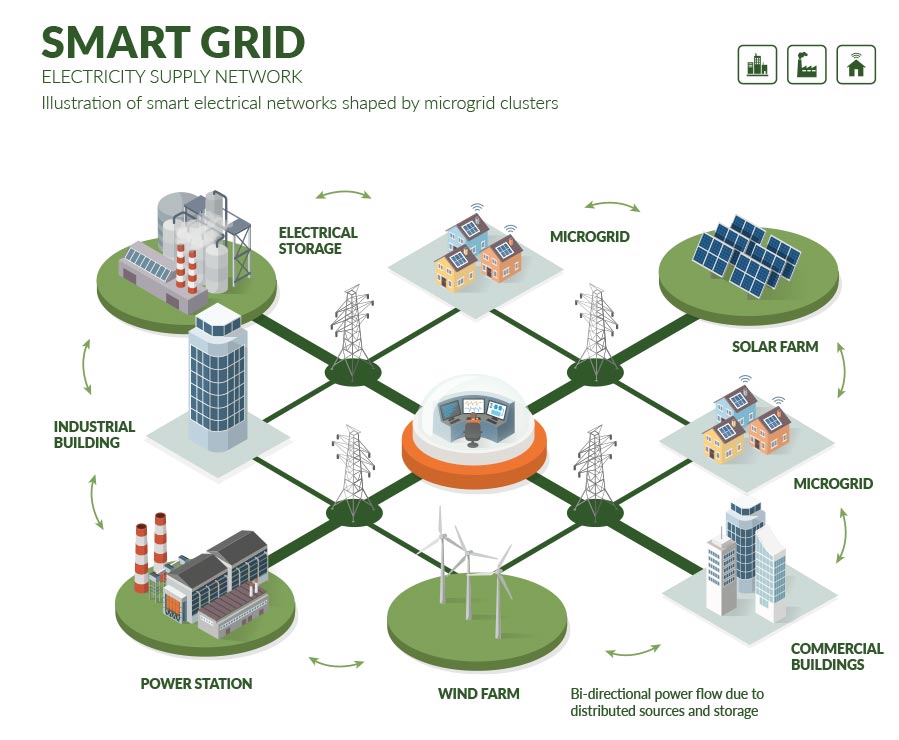 Microgrids are the next step in the green journey. They work as a self-contained small-scale power grid that can operate independently while linked to the main power grid. These microgrids contain their own renewable energy source, storage systems, and loads all working cooperatively.

Microgrids can operate autonomously in standalone (islanded) mode if required, or they can be integrated into the larger distribution network allowing for effective use of many decentralised sources of electricity generation. Multiple microgrids can then be interconnected together to form a larger distribution network. This interconnection enables the transformation of the electrical grid into a true smart grid, offering better supply reliability for customers.

At the Faculty of Engineering, we (Dr. Alexander Micallef, Prof. Ing. Cyril Spiteri Staines, Prof. Maurice Apap) have been working in the field of microgrids in close collaboration with the Department of Energy Technology at Aalborg University for the past six years.

The work started with investigations into single phase microgrids where electric power is distributed through alternating current (AC) using a system in which all the voltages of the supply vary in unison. We modelled a group of neighbouring households in a residential area with local electricity generation. With this, it was essential to ensure that the voltage and frequency were within acceptable levels for the appliances connected. Failure to do so would have resulted in considerable damages. Considering that the energy sources also had inverters that change direct current (DC) to alternating current, specialised control techniques needed to be developed and implemented through this project to ensure reliable operation. These control algorithms for the inverters enabled both islanded and grid-connected operation, while being coordinated by a local microgrid central controller to manage and optimise the operation of the microgrid. This coordination can also be improved through decentralised control by applying additional IoT concepts. The next step shall be to scale up the laboratory setup and possibly integrate it into a community project, where the potential benefits of such systems could become more evident.

The team is now also investigating DC microgrids for electrical networks in buildings. While electricity is usually provided in the form of AC, there are various consumer electronics powered by DC, such as LED lighting, laptops, and smartphones. Therefore, DC microgrids have potential advantages over their AC counterpart: lower conversion losses due to fewer stages (DC to AC and vice versa); no requirement for grid synchronisation; and elimination of voltage phase or frequency issues that occur on AC grids. Now we are working on determining the best network architecture and energy management strategies for a residential building with the possibility to extend this to a group of buildings.

The team is exploring the application of microgrids and IoT in smart grids for marine and land transportation systems. Sustainable transport is a priority in developed countries and efforts are being made towards greener transport at European and national levels. The European Commission is pushing a ‘Smart, Green, and Integrated Transport’ initiative, which aims to boost the competitiveness of the European transport industry and achieve a European transport system that is resource efficient, environmentally friendly, safe, and seamless for the benefit of the economy and society at large.

The research areas of smart grids and microgrids are rapidly growing, and the potential benefits on the local and global scale are enormous. By allowing for a deeper integration of renewable energy sources, we would like to strengthen the Maltese position as a green island through more projects in these areas.

This change needs to happen through collaboration with local and foreign industry, electrical network operators, as well as policy makers that are open to moving beyond traditional energy generation and distribution schemes to create the backbone for an innovative Maltese Islands