The mystery of St Paul’s shipwreck

Malta’s identity is deeply intertwined with St Paul. The Islanders have even named a whole bay after him. However there is no hard evidence that St Paul was actually shipwrecked in this area. Elaine Gerada Gatt investigates. Illustrations by Whitebeard Illustrations. 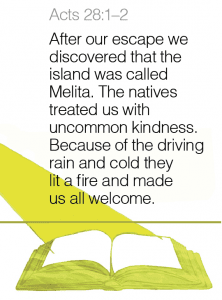 For years the Christian religion on the Maltese Islands has had strong foundations. Popular belief holds that St Paul brought Christianity to Malta after being shipwrecked on the Islands. Some academics are sceptical. Although documentation from the Middle Ages is scanty, when the Order of St John arrived in Malta, it was already very clear to them that the faith revolving around St Paul was very strong.

Malta seems the most likely place where St Paul’s ship was grounded. The other contender was Mljet (Mileda) which is close to Dubrovnik in the Adriatic Sea. Based on the wind direction prevalent during St Paul’s voyage from the Levant to his execution in Rome for his Christian belief, Malta is the most possible location. The new question being debated is whether St Paul’s vessel was actually wrecked towards the north of the Island at St Paul’s Bay, or nearby at the salt pans of Salini, or on the Island’s southern beach called St Thomas Bay in Marsascala.

Archaeology to the rescue

Dr Timmy Gambin, a marine archaeologist (University of Malta), notes that current Maltese harbours mostly face the North East making them susceptible to the strong North Easterly (Gregale) winds. The reconstruction of Malta’s ancient coastline will help define whether vessels in Malta’s harbours would have been protected over the winter period. St Paul is thought to have reached our shores in that season. Current harbours have a very different coastline today than nearly two thousand years ago. Coastal erosion, land subsidence, plate tectonics, and siltation are constantly altering coastlines over many years.

Siltation is a major coast-modifying factor. The process involves soil being washed down by heavy rains or landslides, with the silt or clay building up in flatter areas like the bottoms of valleys and coastline. ‘The city of Pisa in Italy is a clear example of a well known harbour in the Middle ages but which became inaccessible after the fifteenth century because of the amount of silt that accumulated in its bed’, said Gambin. With reference to Malta, Gambin found out that the area of Burmarrad and the nearby floodplain was probably a harbour in St Paul’s time, since it was covered in sea water. Supporting this claim is Prof. Godfrey Wettinger’s research on place names, which indicates that the same area in the Middle Ages was well known for its stagnant water pools and had different names suggestive of a port. Back then Burmarrad was known as Bir l-Imriekeb (lit.trans. ‘Well of Vessels’) or Ħirbit l-Imriekeb (lit. trans. ‘Destroyer of Vessels’). Does the word ‘Bir’ (well) refer to a metaphoric well which engulfed vessels, or in the case of ‘Ħirbit’ (destruction) was the area well known for wreckage? The base root of the word ‘Ħirbit’, ‘ħ-r-b-t’, denotes the term ‘ħarbat’, meaning ‘to destroy’.

To gain valuable archaeological information about where St. Paul was shipwrecked many studies have been carried out. In 1999, Gambin, the United States Institute of Nautical Archaeology, and the Museums Department scanned the Valletta harbours using sophisticated technological equipment, such as a side-scan sonar, together with diver surveys. Salina Bay (Salini), Qawra point, and St Paul’s Bay were also scanned. These surveys help map the physical features of the bays and harbours, while providing clues to locate or study archaeological artefacts that might give an idea to the ship’s location. The earlier Malta Archaeological Survey (1988), proved that St Paul’s Bay and the Salini area were used as harbours in the past, however it did not discover any hard evidence directly associated with St Paul.

Meanwhile, new technological equipment is allowing more accurate underwater surveys to take place. Remote sensing technology is making amazing discoveries for marine archaeology without damaging the site. This technique mostly uses airplanes or satellites to map large areas of coastline accurately enabling the study of archaeological sites—like locating St Paul’s wreck. Objects under the seabed can be detected by means of a sub-bottom profiler which maps the sediments underneath the seabed using sonar.

Underwater robots or remote operated vehicles (ROVs) allow archaeologists to explore deep-water sites. This equipment is usually operated from on-board the vessel while the ROV explores the archaeological site. ROVs usually have cameras to take both still and moving images, as well as lights and arms which can be used to lift up objects. ‘Technology is great and it does guide you but it does not provide you with answers. The continuous changing nature of coasts does not make seabed surveying easier,’ explains Gambin.

This technology is helping narrow down the search for St Paul’s shipwreck. Gambin has developed a new model based on the technology available and  coupled with literary sources like the Bible. This model sets criteria to help find the harbour close to which St Paul’s ship sank. It will be explained in more detail in an upcoming publication. He points out that despite the model helping to narrow down the ship’s possible location, this research does raise new dilemmas. For instance, ‘if one questions whether the actual author [St Luke] of the Acts of the Apostles in the Bible, was actually on board the ill-fated vessel, the whole perspective from which we have been looking changes drastically’. This is because if St Luke was not on board, then the written account would not be an eyewitness account, but it would be based more on hearsay.

Other theories exist. Bob Cornuke, an American amateur Biblical archaeologist, who is conducting research which can shed further light on passages from the Bible, claims that St Thomas Bay is the most likely location of the shipwreck. His theory is based on four small anchors that were found in the area. The Bible refers to the wrecking being in a place where two seas meet. So according to Cornuke, the anchors and physical geography of St Thomas Bay make it a likely place for the shipwreck. For now, this hypothesis fails due to lack of evidence.

Whilst diving a few metres off the Għallis Tower in Salina in 2005, rescue diver Mark Gatt came across a one ton lead anchor. The sheer size and weight suggested that this must have belonged to a large vessel—fit for a galleon. Yet the most interesting part of the anchor still had to be revealed. As it was lifted out of the sand, the impressed letters ISIS and SARAPIS appeared on the side of the anchor which had been lying face down in the sand for years, probably preserving this valuable evidence. These are the names of two Graeco–Egyptian gods, suggesting a ship from St Paul’s land of origin. Although this has been considered a major find, it still does not prove that the anchors belonged to the actual vessel St Paul was on when being taken to Rome.

Salina Bay has a large number of archaeological artefacts, while St. Paul’s Bay and St. Thomas Bay do not, making Salina a more likely candidate. Mark Gatt is currently working on a documentary highlighting the importance of Salina Bay as a more likely place for St Paul’s shipwreck. Current technologies and a large concentration of archaeological artefacts found within the area are shedding more light on Salina, although this is by no means conclusive.

‘The beauty of this research topic lies in its elusive character,’ claims Gambin and it is precisely this elusiveness which motivates researchers. New concepts and outlooks keep emerging, encouraging more thought-provoking hypothesis. The answers though, are still obscure and far from conclusive. The location of St Paul’s shipwreck is still shrouded in mystery!