So you think you can’t dance?

Stalking the President, fundraising, and improving people’s lives through dance is all in a day’s work for Step up for Parkinson’s founder Natalie Muschamp, as Dawn Gillies finds out.

Natalie Muschamp has been dancing for as long as she can remember. Throughout her twenties, she was performing all over the world, carving out a successful career. A decade deep, she decided to change gears, shifting into a career in media. However, it wasn’t long before she began to dream of returning to dance.

Muschamp decided to formally study dance as a mature student at the University of Malta (UM) , and immediately began looking to the future. She knew she wanted to use her dancing skills to help others.

‘When you’re younger and you’re dancing, it’s all about you’ said Muschamp, ‘but I realised that my ego had left the building. We’re not on this world to think only about ourselves. We’re here to care about other people.’ With this new outlook, she started combing through her options. She considered how she might help people with ADHD and autism, but an experience closer to home changed her life and ultimately the lives of Parkinson’s patients all over Malta.

Muschamp’s aunt lost her partner to Parkinson’s disease, a progressive neurodegenerative disorder with no cure. Patients suffer from tremors, decreased motor abilities, loss of senses such as taste, and ‘masking’ of the face, where it is difficult to display facial expressions. It is sometimes impossible to make the body do what you want it to.

Muschamp watched her aunt react to the tragedy with incredible courage, walking from Amsterdam to Rome to raise money for the Dutch Parkinson’s Foundation. Following this, Muschamp used the time she had left at the UM to research how dance could be therapeutic for Parkinson’s disease.

Looking at studies from the last 20 years, Muschamp found clear evidence that dance therapy can improve balance, motor function, and quality of life, imbuing people with confidence. Sadly, she also found that no form of dance therapy was available in Malta. But Muschamp decided it was time to change that fact.

Research in hand, she contacted the Malta Parkinson’s Disease Association (MPDA) and asked for their support. They loved the idea so much that they paid for her to attend a training course in the UK and helped to organise her first class. Together with physiotherapist and dancer Amy Dimech,  they ran the first class. Four patients and four carers attended—a success.

For Muschamp, the class members have become family.

‘My sister was filming it, trying not to cry because she was so touched.’ Everyone there thought that dancing wasn’t for them, but that idea soon changed. With just one class, patients and carers could already see the benefits. Patients had improved breathing and mobility. More classes could only mean even greater results.

But, as with most charitable organisations, one of the biggest hurdles was funding. Classes had to be free, and that was not going to change. To achieve this, Muschamp used every connection she had, and even made a few new ones along the way.

‘I knocked on every door for funding.’ Persistence was key. With every presentation, Natalie grew more confident. She presented at the Social Impact Awards and approached the Arts Council and Malta Enterprise. However, she didn’t do it alone. She had the invaluable help of mentors Prof. Russell Smith and Ing. Joseph Bartolo (Centre for Entrepreneurship and Business Incubation, UM), as well as a wealth of support from sister Rachelle and best friend Ezgi Harmanci.

Reaching for the stars

‘I want Malta to be the first country in the world to support dance classes for people with Parkinson’s and their caregivers in the health system,’ says Muschamp.

With such an ambitious goal, they needed politicians to endorse their efforts. But they didn’t aim for just any politician. With Harmanci by her side, Muschamp went straight for the top. ‘We kind of stalked the president’ she divulged. Months of attending black-tie balls and galas made them familiar faces, so when they told the President Marie-Louise Coleiro Preca about their work, she offered them a meeting. There, they showed her a clip of the first-ever class, and that was more than enough. She promised to help. 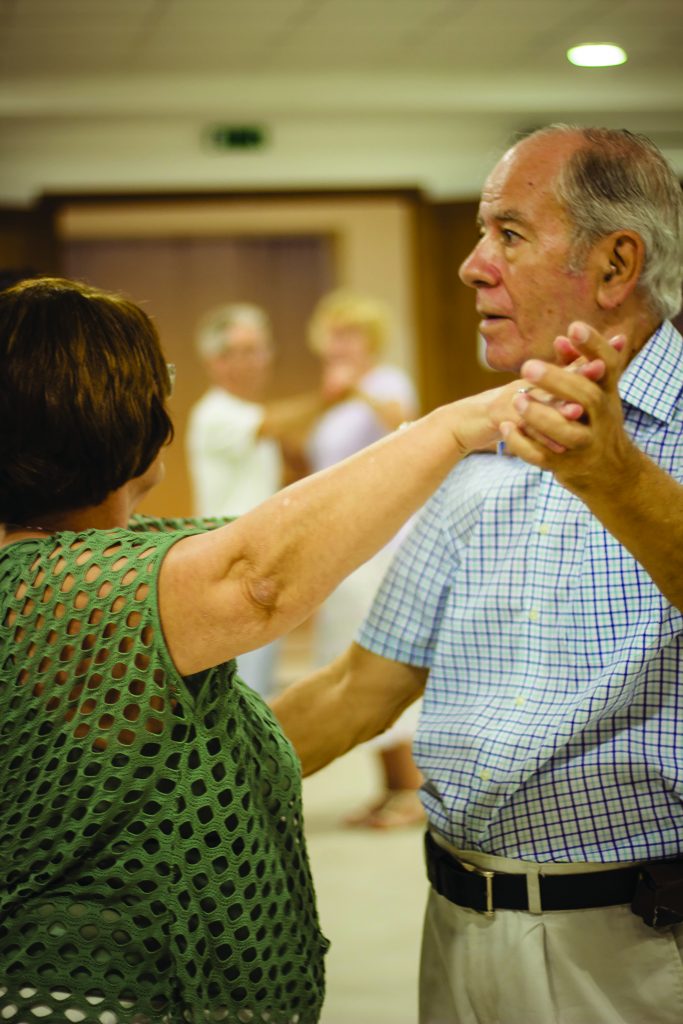 She steered them towards the Malta Community Chest Fund Foundation, which she heads. They quickly realised that to access those funds, however, they needed to become a voluntary organisation. Stacks of paperwork and proposals later, Step Up for Parkinson’s became official and successfully funded.

They also secured funding from the Malta Memorial District Nursing Association (MMDNA) to attend more training, this time in the US. Not only did it improve their teaching skills, but it prepared them for some dark realities they were yet to face: the passing of class members. When this did eventually happen, Muschamp remembered the important lesson they had learned, ‘I’m not going to cure them, but I can make their time better.’

This funding has allowed them to address some criticisms of dance therapy. Currently there are only a small number of studies conducted on the topic, and with the MMDNA and UM backing them, Muschamp and Dimech will soon be heading a 12-week study analysing the impact the classes have on carers and participants, both physically and mentally.

Even with Muschamp’s enthusiasm, convincing people to come to the class has been a challenge. Muschamp wanted people to see that you do not have to be a dancer to enjoy and benefit from the sessions. Classes focus on breathing, movement, and creativity. But overcoming shyness and fear is a first step that’s big for anyone. It is an even greater challenge for people with Parkinson’s, who have the extra worry of losing balance at any given moment.

Muschamp realised the best way to convince people to join was to show them how far others had come with the help of dance, specifically Dance for Health founder Marc Vlemmix.

Step Up organised a VIP event around his visit to help raise awareness, inviting healthcare professionals, politicians, and the press. They made sure everyone would want to be there, with the opening address given by none other than President Marie-Louise Coleiro Preca herself.

Also speaking at the event was Mildred Atanasio, whose mother attends Muschamp’s classes. ‘You do not have to be a dancer,’ she said. ‘A little encouragement, sometimes even a lot, is all there is to it.’ Atanasio’s mother has done so well that her neurologist has urged her to keep attending the class. In fact, the VIP event was so successful that a good number of neurologists have embraced the idea and are recommending the classes to their patients.

Two years of tireless work and campaigning have paid off. ‘[At a recent class] I looked round and realised [everyone in attendance] was standing on one leg!’ This might not seem like a large feat to most of us, but it means the world to the people in Muschamp’s class. It’s a testament to the huge progress they’ve made. 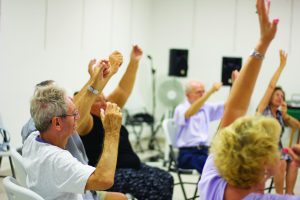 With funding secured until March 2019, the focus now is on training new teachers and keeping the operation sustainable so that they can offer free classes. To do this, Step Up for Parkinson’s is joining organisations worldwide on World Parkinson’s Day this year to raise funds, energy, and awareness. They will also showcase the groundbreaking work they have being doing for patients in Malta, with a performance and a gala dinner at the Corinthia Hotel in Attard. Participants have become so confident, they cannot wait to perform and show off their progress.

For Muschamp, the class members have become family. She has watched them regain confidence, rekindle romance in their relationships, and build a community that they can depend upon for support through their condition. From only eight people at the first class, there are now 60, but with each new member, the challenge starts all over again, and Muschamp is excited to welcome them into the fold.