La Biennale di Venezia is the world’s biggest art event. Every two years, Venice erupts in a glorious art extravaganza as artists from all over the world descend on the city in celebration. This year marks the 57th edition of the International Art Exhibition. It also marks Malta’s return to the event. Emma Pettit tells us more.

Curated by artist-curators Bettina Hutschek and Raphael Vella (commissioned by Arts Council Malta) the conceptual exhibition: Homo Melitensis: An Incomplete Inventory in 19 Chapters delivers an investigation into Maltese identity through artworks, objects, and documents. The exhibition has already been touted as one of the top five pavilions by the Guardian, a leading British newspaper.

Homo Melitensis is a Maltese man – an everyman – who dwells on the island surrounded by the sea and ancient relics. The 19 chapters take audiences into an elaborate journey that travels simultaneously in different directions. Each letter of the alphabet becomes a chapter that has been attributed a subheading to explore ‘his’ or Malta’s history, be it through dreams, memories, war, diaspora, or daily life. For example, the letter ‘D’ represents the ‘fortified island’ and the great feats of engineering used to construct the walls built by the Knights to defend Valletta. These now multi-purpose walls are reflected in the exhibition by a triptych of paintings by artist Teresa Sciberras. 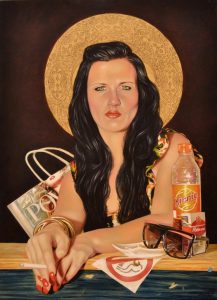 Saintly iconography is incorporated into Darren Tanti’s L’Annalisa — a modern, young Maltese woman featured in ‘G’ for ‘physiognomy’, in a chapter that examines the ‘face’ of the Maltese. ‘Subjects to avoid when talking to strangers’ is the heading for ‘Ġ’, which looks at censorship, political correctness, and taboos. Satirical cartoonists Joe Sacco and Maurice Tanti Burlò (known as Nalizpelra) address the reaction to the immigration crisis in The Unwanted and hunting lobbyists in Shots for Votes, respectively. David Pisani’s photograph Strait Street depicts what was once Valletta’s gathering point for prostitutes and Roxman Gatt‘s animation Virgin Mary’s Love Juice playfully juxtaposes religious images and blasphemy.

‘GĦ’ stands for ‘Gender and/or’ and features the works of Gilbert Calleja. His works titled Liminal are a series of dazzling and intimate portraits of transgender life, challenging a prehistoric clay statue of an ideal female torso, also exhibited. ‘Religious Objects’ feature under chapter ‘H’, illustrated by Austin Camilleri’s Rosary—made up of dozens of crying baby heads. Further holy relics are reimagined in sculpture by Aaron Bezzina with his Untitled (cruci-hammer and nail),  which subverts the image of the cross in ‘Ħ’, ‘Us and Them’.

‘I’ stands for ‘strangers coming to stay’, featuring Pia Borg’s film Silica which examines the Maltese diaspora from the perspective of being born in Australia, alongside the ‘alien’ of red palm weevils which have destroyed many Maltese palm trees.

Traditional feasts occur across the Maltese islands, which brings communities together and feature over the spring and summer months, and artist Adrian Abela has documented the experience of fireworks in his film Nebula, featuring in ‘IE’ for ‘festa!!!’ 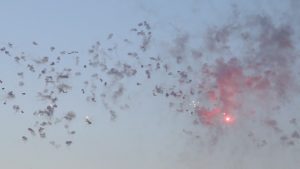 A still from Nebula by Adrian Abela

Karine Rougier meanwhile re-appropriates a vintage graphic with her own festive projection in the surreal Horses dream. The intricate sculptures comprised of hundreds of rabbit bones symmetrically fused together by artist John Paul Azzopardi are in the chapter ‘L’ for ‘between melangia and uff’, which addresses past lives and nostalgia, but also visions of the future.

For more on the Biennale, keep an eye out for issue 20 of THINK magazine out in June.