Graziella Vella from the Valletta 2018 Foundation

Culture is expressed through using spaces, which depend on the nature of the celebration, event, or performance. Maltese people make innovative use of many outdoor public spaces, in line with our climate and assets.

The cultural sector lacks information of where and how the cultural spaces are used. To fill this need a cultural map was commissioned in 2011 by the Inter-Ministerial Commission for the European Capital of Culture (IMC_ECoC), one of the Governors within the Valletta 2018 Foundation. These spaces were interpreted in a wide sense, from spaces used for community or national celebrations, to others for niche audiences, and included both the general public and minority groups. 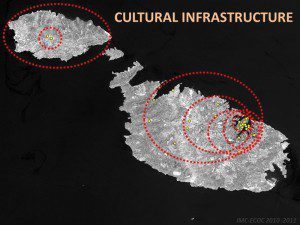 This exercise resulted in 2 main outcomes. The first is that in 2011 cultural infrastructure projects were mainly focussed around Valletta and the Greater Valletta area (see map) with a few exceptions in northern Malta and Gozo. The second outcome showed how government and EU funding focused on regeneration and cultural heritage, with minimal funding on culture, the arts, or creative clusters.

“It will be accessible to all citizens and part of the process to enable the long-term social, economic and cultural development of Valletta”

A Cultural Mapping project by Valletta 2018 Foundation and the Parliamentary Secretariat for Culture followed this exercise. The Cultural Mapping project is the first research collaboration by the Valletta 2018 Foundation and University of Malta (UoM). Over a two-year period, a number of University academics will be involved in this project. The aim of the project is to analyse the cultural use and practices in public and publicly-accessible spaces, venues, and sites in Malta and Gozo.

Its output will result in better data to formulate and plan V.18’s cultural programme. The data can be used to strategise venues and allow for the implementation of an important part of the V.18 research programme. 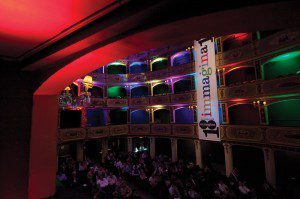 The project is structured into two parallel phases and is aimed at producing two types of outputs. One output is a series of maps, of public spaces and venues, combined with who makes use of them. Data will be sorted into three main categories, cultural infrastructure, sports infrastructure and educational facilities. These maps will be interactive, updatable, and freely available online. Findings will also be published for all interested users. GIS (Geographic Information System) technology will be used to map the areas through the Institute for Climate Change and Sustainable Development. The second phase and output of the project will analyse contemporary cultural activity and how space and community practices interact, focusing on seven thematic areas. These are the built environment, sociology, culture, education, anthropology, public policy and economics. Each thematic area is linked to a UoM academic, who will focus on different localities, including Valletta and the Three Cities. By encouraging a multi-disciplinary analysis, the Valletta 2018 Foundation will encourage inter-faculty and inter-disciplinary collaboration to achieve better results. In line with the project’s philosophy, a final conference open to the public will communicate all findings. The organisations involved will be looking for direct ways to communicate the project to local communities to help make sure that the Maltese population is aware of the maps and research to enhance their use.

Similar projects have already been developed in Europe. The Aarhus mapping project was carried out by the Danish ECoC for 2017. This ECoC culturally mapped the city of Aarhus in the spring of 2010 to understand its weaknesses. It also mapped the city’s strengths, the city’s external and internal image, the city as viewed by minority groups, children, and young people. They analysed Aarhus as a creative and democratic city, and assessed its cultural resources.

Another cultural mapping project was undertaken outside of Europe in Latin America and the Caribbean. The Inter-American Foundation for Culture and Development (FICD) completed an intensive regional analysis. This Foundation will create an Atlas Cultural Infrastructure of the Americas, an information platform for the cultural resources of the region to generate reliable statistical indicators and sector comparable culture.

The V.18 Cultural Mapping project will provide a visual and deep analysis of the use of space for cultural purposes. Maps will be available online for everyone. It will be accessible to all citizens and part of the process to enable the long-term social, economic and cultural development of Valletta. The project will help make the most of Malta’s climate and space. •