Maltese Cultural Participation: What do the people want?

Malta is rich in culture—that is a fact beyond contention – and whose vast range of cultural activities attract different people with varied interests. But how does this fit in the context of Valletta being the European Capital of Culture (ECoC) in 2018?

Before delving into the many questions that surround this, one needs to perhaps address what we understand by the term ‘culture’ – are we talking about traditions or art? Cultural participation in Malta is often believed to be low, and a Eurobarometer survey carried out in 2013 confirmed that the Maltese are among the least active participants in culture in Europe. However, culture is not something that can be given a clear-cut definition. The term can refer to anything from art exhibitions to the more popular, traditional festi (feasts). Such feasts are not taken into consideration by many surveys like the Eurobarometer.

The Valletta 2018 Foundation’s research department has therefore embarked on a five-year research process (2015–2019) whereby it aims to understand the factors that affect cultural participation to create a body of research that will shed light on participation in the sector. The research will help artists, cultural practitioners, and policy makers.

Last year, the Valletta 2018 Foundation conducted the first in a series of surveys that are looking  into cultural participation in Valletta. The survey, carried out in collaboration with the National Statistics Office, asked 1,138 respondents about their preferred cultural activity. The top three cultural activities the Maltese public enjoyed were citywide activities such as Notte Bianca, followed by Carnival, and visits to museums and historical sites.

The events took place in Valletta and registered more active participation from residents than from those living outside the city’s walls. Valletta residents are more likely to have attended artistic exhibitions and events when compared to non-Valletta residents (18% vs 12%). People from the island’s Northern Harbour region (the area around Marsamxett Harbour and neighbouring areas) placed second after Valletta residents in their likelihood to have attended some form of cultural event in the capital. On average, 35% of residents from the Northern Harbour region    have attended some form of cultural activity in Valletta, compared to an average of 15% from other regions. These statistics give the impression that physical proximity plays an important role in the degree of cultural participation. People commented on the pleasant atmosphere and the sense of unity events created while others said that such events make for a different kind of family outing.

The Maltese people also seem to enjoy the performing arts. Other popular activities include going to the cinema or attending film screenings, artistic exhibitions and events, live music and live theatre events. These are followed by the Valletta parish feasts—more traditional activities tied to the city itself. Dance is not as appreciated as other performing arts disciplines, with a staggering 94% of respondents claiming they had never attended a dance performance. The only other activities less well-attended are passion plays in Easter time (95% never attended) and the Regatta (96% never attended). 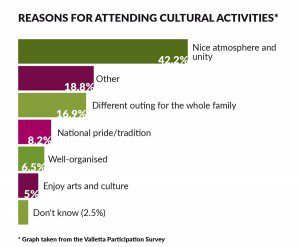 The general consensus of the respondents was that Valletta is a cultural city which is improving in terms of its cultural offerings as well as its image. However, attendance for Valletta’s cultural events is still relatively low with people showing a lack of interest in cultural activities (38% of respondents claimed that they do not attend cultural events as they are simply “not interested”). This statistic is a concern in the light of the fact that Valletta will be capital of culture in just two years. It is the role of the Foundation to use these findings to find new opportunities that can boost cultural participation and encourage engagement with cultural activities. This data can also help other entities and practitioners in the sector.

The Foundation has developed a varied cultural programme, which is open, engaging, and accessible. To complement the aforementioned Valletta Participation Survey, the Foundation has also carried out an in-depth, qualitative analysis of its cultural programme. This research shows that the Valletta 2018 Cultural Programme not only includes projects related to the visual arts and feasts in Valletta, but also other community projects, aiming to eliminate barriers that prevent cultural participation and that allow for the co-creation of cultural activities and audience development. The study shows how the Foundation is taking a contemporary approach in developing cultural projects, by looking at a long-term development process and aiming for a long-lasting legacy. This research shows how that, to date, the Valletta 2018 Cultural Programme has focused on community and interdisciplinary projects, as well as projects involving music and film.

Both the Valletta Participation Survey and the qualitative analysis of the Valletta 2018 Cultural Programme will continue to be carried out in the coming years. Such studies explore the relationship between the cultural programme and participation countrywide in order for changes in the level of cultural participation in the Maltese Islands can be compared.

The Valletta 2018 Evaluation and Monitoring research process is a five-year project (2015–2019) that is looking into the impacts of Valletta 2018 on the country. The Valletta Participation Survey is a study carried out in collaboration with the NSO that takes place on a biannual basis. The qualitative study, titled ‘A Comprehensive Analysis of the Valletta 2018 Cultural Programme’ is being carried out by Daniela Blagojevic Vella.