With a massive following of 25,000 people, Kelma Kelma is the Facebook page that has taken Malta by storm. From a simple collection of linguistic curiosities borne from one man’s love of the Maltese language, it has developed to become an unconventional but highly effective teaching tool. This is the journey of Kelma Kelma from the man behind the computer screen, Dr Michael Spagnol.

On 5th January, 2013 Kelma Kelma was launched with the simple yet elegant black profile picture the Maltese online community have come to recognise. By the 6th, the first of countless posts came. This one defined the word ‘Nomofobija’, the fear of being away from one’s mobile phone. 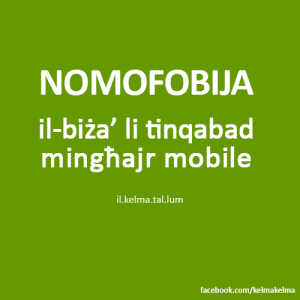 Back then, this post received 74 likes. One of the latest posts makes a jab at Malta’s sky high electricity bills with the musing ‘Meta kont żgħir kont nibża’ mid-dlam. Issa li kbirt, nibża’ mid-dawl, l-iktar meta nirċievi l-kont’ (when I was young, I was scared of the dark. Now I’m older, I’m scared of the light, especially when I receive the bill). Till writing, it garnered 250 likes and counting.

Second only to Malta Diżastru Totali!, Kelma Kelma’s 25,000 followers are equivalent to roughly 11% of the 220,000-strong Maltese online population. Its rapid growth shows the concept has hit a distinct nerve with people, but for Dr Michael Spagnol, this manipulation of language was always something of a game.

After all, Maltese itself was a consistent source of amusement in the Spagnol household. His father’s jokes were always some clever play on words he would make up during the day. Even his grandfather was a treasure trove of expertly structured riddles, witty renditions of the popular Ħaġa Moħġaġa.

Being surrounded with such inspiring characters since he was a boy, it was only natural that this linguistic flair would seep into his studies. Michael pursued Maltese all the way to the University of Malta. As an undergraduate in 2005, his focus was on literature but linguistics soon took centre stage. ‘As a science, it takes you away from language and its function to look at it from an outsider’s perspective. It forces you to think about what language is and how it is constructed. It analyses the smallest of things, like how a word came to be or how the lips and tongue work together to produce a specific sound. This defamiliarisation of language is now rooted in his approach to the posts on Kelma Kelma.

The idea came to him at University.

It was just a fun simple exercise to stretch his linguistic abilities. At first, it was a magazine or a booklet filled with facts, stories, and musings about words and sayings he liked or found interesting. But it was years later, after he completed his Ph.D. in Germany, an investigation of the morphology and lexical semantics of the Maltese language (see text box), that the idea truly began growing and taking shape.

When he returned to Malta, Facebook had exploded. People were subscribing in droves. And then it happened. ‘People who I knew spoke Maltese all day and posted online in English. Inspirational quotes in particular caught my eye. Even if it was broken English, it didn’t matter, people preferred using a foreign language to their own.’

This observation affected Michael. He recalled his idea from University days. It would be the perfect response, a subtle jab at the status quo of ‘it can’t be done in Maltese’. He didn’t care if no one paid attention. It had to be done. Michael created the Facebook page, Kelma Kelma.

The page started out with 11 albums, including il.kelma.tal.lum, a collection of definitions, and logħob.bil.kliem, a clever set of jokes based on puns. The seeds planted by Michael’s father and grandfather had now grown and began to bloom. 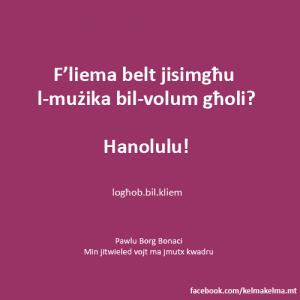 His memes consist of simple text on colour. No fuss, just clean, bright labels that would stand out on a page. The issue of length came into play, but it was a no brainer, ‘People get bored easily so they tend to ignore long texts. My work was based on the idea that the shorter the message, the more people would read it.’

Likes on the page began trickling in slowly, but after just one week, traffic began pouring in. The massive snowball effect that followed was unprecedented. The response was astounding. ‘I never imagined that would happen. I thought the page would appeal to students and scholars, but all sorts of people took interest. People even started sending me messages saying the page inspired them to start writing stories and reading poetry in Maltese again. I realised, contrary to what I thought at first, that people were setting their own language aside, there is actually a great thirst for knowledge and use of Maltese.’

The jab provided the answer. Rather than an actual dislike for Maltese, Michael now believes the problem lies with Maltese language disuse and unawareness. In fact, the discrepancy between the use of Maltese and English didn’t stop with Facebook. ‘People write emails, SMSs, wedding invitations… even cards in English. The most popular newspapers in Malta ‒ they’re all in English. People are even speaking to their children only in English now’.

The Maltese language is disappearing from the lives of Maltese people. This is especially true for the younger generation, children, and adolescents. Films, music, and everything else associated with popular culture, everything that is considered ‘cool’, in Malta is in English. Maltese is reserved for either the badly written and produced local television or the high brow, intellectual fodder that the vast majority do not engage with.

Kelma Kelma now seeks to take the first step at breaking down those boundaries. Via memes, Spagnol is disseminating compact nuggets of linguistic knowledge, exhibiting how the Maltese language can be moulded and manipulated at will.

The focus is on ‘live Maltese language’, not the standard stale schoolbook grammar material. That is why even words that are considered ‘unsavoury’ (kliem baxx) by some, such as ‘mazza’ (either a mallet [n.] or a physically attractive woman [n.]), ‘tiffrejpja’ (to frape — hack into a Facebook account to post a humorous or rude post [v.]), ‘skappatura’, (a short-lived love affair [n.]), and many others are not censored as is the norm in more traditional media. Audiences did not push back; instead they lapped it up liking and commenting on these posts significantly more than others.

From then on, all kinds of questions and requests came pouring in. The album count now reaches 27 and shows no sign of slowing down. Surprisingly, Michael has even found interest in grammar among the online community. ‘Although this wasn’t something I had originally intended for Kelma Kelma, I found many people asking specifically for grammar points.’ The Internet’s two-way communication stream is allowing the audience to shape the page into what they need it to be: a teaching tool.

Proof of Kelma Kelma’s popularity came with the variety of copycat pages that have sprung all over Facebook. Imitation is the sincerest form of flattery. The most infamous is Kelma b’Kelma. Now, while Kelma Kelma seeks to propagate helpful facts and tips in a humorous way, Kelma b’Kelma attempts to poke fun and confuse, coming up with their own theories, mostly false, behind the origins of certain phrases — all for a laugh.

“Kelma Kelma seems to be providing people not only with a sense of pride in their own language, but […] a sense of belonging”

Early on, because Kelma b’Kelma was not clearly portrayed as a parody, people assumed the page to be a spin off to the original. The influence of Kelma Kelma in the public sphere, as a point of reference of the general public, became particularly clear with the furore surrounding one particular post that announced the impending elimination of the ‘ie’ and ‘għ’ from the Maltese alphabet.

Believing that this was a serious announcement by Kelma Kelma, people reacted. The page’s inbox was flooded with questions over this supposed change in Maltese grammar. According to Michael, parents even went to their children’s schools to clarify this ‘new development’. The media, including radio station 89.7 Bay, also got caught up in it, posting the picture on their Facebook page. 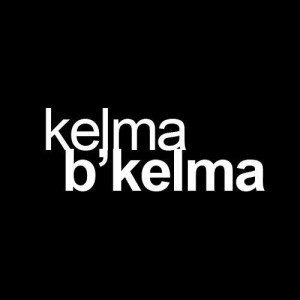 Now, the parody page has lost most of its followers, dwindling down to just over 1,000. The sense of belonging that Kelma Kelma created backfired violently. By and large, the public now either ignores posts from Kelma b’Kelma or admonishes them and their author. A continuous stream of criticism follows every upload, with people constantly correcting deliberate ‘mistakes’.

From a page that started out as a ‘game’, there is a distinct seriousness surrounding Kelma Kelma. According to Michael, ‘it has been an eye opening experience to see just how much people have become attached’. In fact, should he find himself away from his computer for a day, for whatever reason, he can be sure that the next day he logs in on the page his inbox will be full of messages from people asking when the page will resume as normal. ‘Kelma Kelma seems to be providing people not only with a sense of pride in their own language, but also something deeper, like a sense of belonging.’

The impact the page has had is undeniable. It has shown people that language is much like a child: in order for it to grow, it needs nourishment. Maltese will only be ‘antiquated’ if people do not use it. There needs to be a real effort to modernise the language if it is ever to move forward with the times. However, the work of Kelma Kelma is not nearly finished. The page has now begun its journey beyond Facebook. Kelma Kelma is now on YouTube.

With the aim of reaching a wider audience, Michael is currently looking for collaborators to produce a fully-fledged web series. They will function as a humorous Maltese tutorial. Thus, what started as small memes on Facebook will continue to develop into an even more substantial teaching tool. ‘YouTube has become a resource for so many young people. Many students turn to YouTube before they even think about opening a book. English language tutorials, among others, are everywhere. It’s time to have a well-produced Maltese tutorial.’

Not only that, but Kelma Kelma might come full circle with the initial idea of a collection of linguistic curiosities in book form currently in the pipeline. Michael has been receiving numerous requests from his followers asking for a volume they can carry with them, ‘however, it is still early days with this one,’ he said.

While it may seem to some that the page is changing, at its heart it still holds the same value with which it started. To have fun with language, to bring Maltese to the present day, to promote its use, to make it appreciated and admired for the wonderful versatility it holds.

Word by word, kelma kelma, the Maltese language will thrive among the people again.