Mike McCahill for The Guardian is perfectly right to comment that Alex Chandon’s Inbred offers nothing we haven’t seen before. Inbred follows in the League of Gentlemen-line of UK answers to US backwoods horror, which includes Deliverance, Texas Chainsaw Massacre, and my personal favourite Motel Hell. Like so many horror subgenres, it is ‘inbred’ in itself, including the superb parody Tucker and Dale vs Evil, and recent remakes like 2001 Maniacs, a revisiting of H.G. Lewis’s Two Thousand Maniacs!, a ‘blood feast’ of outrageousness which fuses violence and gore with slapstick. Its song ‘The South is Gonna Rise Again’ made the ‘singing/dancing yokels’ something of a stock piece for backwoods-horror (with a nudge from The Wicker Man), recently picked up by the Belgian horror Calvaire, and now — Inbred.

‘Weaknesses in Pacing, Plot and Characterisation’ (Sloan Freer, The Radio Times). All well-noted. This kind of film doesn’t need a plot — it needs a scenario, a setting (in this case, a small northern town), and characters (we’ll come to that later) — any semblance of ‘plot’ in Inbred is paper-thin, and blown away in a hail of scattered limbs and viscera. Yes, I did wonder about the occasional mysterious locked door, curious to see if some hidden depths to the plot would be revealed — but those concerns are soon forgotten. The film makes no pretence to excuse or justify the gore, nor does it parcel it out in tidy and measured little doses — but unapologetically launches it like an ill-mannered series of land-mines, with little sense of propriety or measure.

The first moment our ‘heroes’ are made aware of the danger they’re in marks a sudden and abrupt shift, with barely any sense of transition. There’s no crescendo, nor much suspense — one simply waits for the next thing on the menu at the local inn. The pacing appears less ‘weak’ when one considers the genre. The ‘problem’ is that too much happens, in relentless fashion and none of it has much ‘significance’. The plot takes second stage while the gore is pointedly gratuitous, stylistically and thematically — the first murder occurs because of a misunderstanding, and the rest simply as ‘entertainment’ for the yokels. Again, this (‘weak?’) pacing is consistent with the genre’s gorier strand, where plot — not gore — tends to get in the way.

“The film makes no pretence to excuse or justify the gore”

Characterisation of the main actors is handled the shorthand way — this is a gore-comedy, and both genres tend to prioritise a single trait in each character. Subtle, the inbred locals aren’t. I would be disappointed if they were; indeed perhaps even offended, by a more ‘realist’ approach to something which comes uncomfortably close to being un-PC. Seamus O’Neill (Jim) hams it up with glee, calling to mind the tradition of ‘villainous innkeepers’, and lingering shadows of Tod Slaughter characters from the 30s.

So, let’s judge the film by its own criteria — what are its shortcomings? It lacks the dark satirical edge of The League of Gentlemen, which leaves it open to accusations of being un-PC. In a subgenre already so ‘inbred’, it is just a notable entry — it doesn’t have the potential to become a ‘cult classic’. Inbred doesn’t modify or add anything to the formula, but pays tribute in allusions, while it parodies the genre it works within. Then what about the criteria it does court? Does it make good on its promise of comedy, gore, and — perhaps most importantly — FUN? On all three counts, it delivers — just don’t expect subtlety. 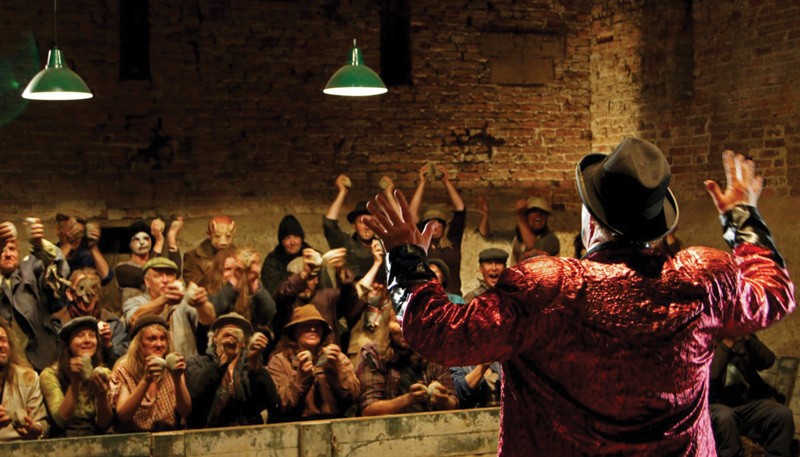