To me, the idea of having art and science in one’s life is not surprising. As I am writing this article about my artwork in a science and art festival, I sit working in a research laboratory wearing a white lab coat. My challenge might be how easily society accepts this combination. In the 2012 edition of Science in the City festival, my participation was marked by two events: a digital performance installation  -hEx: inverting geometry and a talk at Malta Café Scientifique called Bioart: Merging borders between art and science. The starting point for -hEx was the research of Prof. Joseph Grima and his team on auxetic materials. The term refers to particular molecular structures that make a material become fatter when stretched. Normal material, like fabric or rubber band, becomes thinner. So, what does this feature have to do with art? Or how can such a structural and scientific topic become art; it definitely is not arty-colourful! This contradiction is exactly what inspired us to distill the technical side of meta-material research and turn it into a pleasing aesthetic. Beyond beauty, perhaps we also wanted to stimulate individual associations, abstract thoughts, and conclusions. The artistic team involved two performers, video, and sonic artists. We started from basic keywords and concepts, worked separately, and then joined our independent achievements into one artwork. Rebecca Camilleri and I created the choreography. 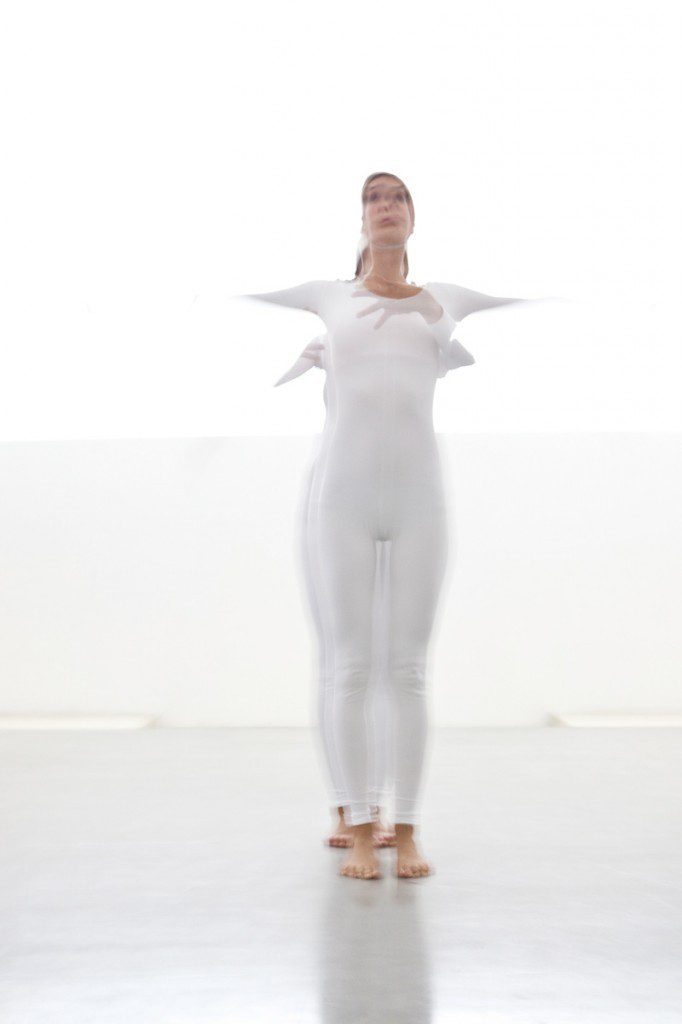 It was based on the geometrical lines that auxetics have to offer. Video artist Anthony Askew also created a clinical, sterile environment by working with lines. At the same time, he emphasised the transformation and deconstruction elements of auxetic materials. He created two videos which became part of the installation. The first introduced visitors to the background information on what they were going to see in the installation space. The second was integrated into the main installation and directly affected by the performer’s spatial movement. This video showed hexagonal shaped structures being constructed and deconstructed. Through in-built coloured light bulbs, the performers could control how the shapes developed using specially created software. The choreography could literally dictate structural changes.

Sound was created using different household and acoustic equipment. It was looped as the 10-minute long choreography repeated six times. There was no definite beginning or end.

We didn’t want to give a digested illustration of auxetic materials. Instead, -hEx is an aesthetic experience aimed for anyone to appreciate. Along with scientific linearity translated into visual surroundings, the piece was meant to raise questions of a live performer presented as an inanimate object in the context of an art gallery. Routine was evident in the purposefully looped sound and movement, while we touched on the audience’s personal associations with outer space, extraterrestrial life, and robotic technologies.

I noticed a striking difference between the audiences over our two performances. The first night was the exhibition opening for a selected range of invited people, the second evening’s audience were mainly families with many young children. Our artwork was very conceptual and rather intellectual. However, the installation appealed to the elite architect or curious housewife, elderly University professor or a young boy. Everyone could control the time they spent at the performance; some stayed to observe for only a few minutes but as our video documentation shows several people stayed for the whole hour of looping actions. Many hour-long observers were young children. I am unsure what was going through their minds, what kind of science-fiction cartoons our movements triggered in their imaginations.

It showed how artwork is about energy flows that have to connect to its audience and less about the concept.

I also gave a talk on Bioart at Malta Café Scientifique. Bioart is a relatively new term that refers to many different artworks that deal with or use different methods of biotechnology, a science that aims to create useful products by using or modifying living organisms. The talk mainly covered examples of conceptual visual and installation art. Such artworks include bacteria-made paintings, genetically modified human cells,  floral and animal tissues, photographs and paintings portraying the invented reality of our bio-technologically modified future or scientifically oriented present. The after-talk discussion was rather heated, picking up on several basic concepts. What is art? What is the idea behind an artwork or its execution? What is ethics? Why does bioart raise scathing ethical debates? And is it legitimate to call genetically modified animals an art piece, for example the glow-in-the-dark rabbit of Eduardo Kac? No doubt, this debate pointed out an existing interest of local people towards the cross-effect of two disciplines. Nevertheless, there is a need to question all of these ultra-modern tendencies and whether they are suitable for a calm, tiny Mediterranean island.

While asking questions and looking for answers are essential human activities, both art and science are ways of channeling these activities through different reference points. In this way, festivals like Science in the City are a great opportunity for people like me to feel normal for a change, despite operating within the often-questionable union of Science and Art.