Every Breath You Take

The air we breathe is vital to our health. Researchers at the Department of Geosciences (University of Malta) are measuring how clean Malta’s air is. They are also optimising a model of the Mediterranean atmosphere to see how climate change will affect the Maltese Islands and their surrounding region. Words by Natasha Padfield. Photography by Jean Claude Vancell.

Freak storms, tornadoes, and heat waves; climate science is a tricky business. Planet Earth is a complex place, with land and sea, deep space and air, all interacting together to shape the breeze on our skin and the salt in our hair. Our society and culture have been moulded by the climate we live in, so as the climate changes, does humanity need to adapt?

Trying to figure out what is in our air, and how the climate will change in the future, are complex problems. But that is exactly what two scientists are trying to do: James Ciarlo` (climate scientist) and William Hicklin (air quality scientist) from the Department of Geosciences (University of Malta) under the supervision of researcher Dr Noel Aquilina (exposure scientist) are working on filling some gaps in our knowledge about climate and air quality.

Computer models are essential tools for climate researchers. These programs take monitoring data from around the world, then perform mathematical calculations to generate a model of our planet’s atmosphere. The models let scientists estimate how the climate will be years into the future. Unfortunately, the Earth’s climate is shaped by hundreds of different factors, from air pressure to humidity, many of which cannot be considered because of limitations in the computational power available. Input every bit of information and the computer would not be able to cope. Making assumptions to reduce the number of factors reduces the reliability of models and reliability is a big issue in climate science. With the constant need for scientists to advise politicians and policy-makers, producing a reliable forecast has been a crucial objective.

Climate simulations are performed using what is known as global climate models. These models divide the world into boxes called ‘grid cells’, which are usually about 100 km by 100 km. Such a large area gives a low resolution and is a stumbling block for scientists interested in smaller regions. Regional climate models cut up ‘grid cells’ into much smaller areas which give a much higher resolution than global climate models and which makes them better suited for modelling regions like the Mediterranean Sea.

Ciarlo` has used the well known regional model, RegCM4, to study phenomena called teleconnections. A teleconnection is a large-scale weather pattern that affects the atmosphere of regions thousands of miles away. Take the teleconnection known as the North Atlantic Oscillation; it is caused by the interaction between two pressure systems, the Icelandic Low (between Iceland and Greenland) and Azores High (west of Morocco). If the Azores atmospheric pressure at sea level rises it will drop over Iceland and that changes the prevailing winds’ direction. In 2014 this teleconnection dropped Malta’s temperatures to near zero over New Year’s Eve. Ciarlo` and Aquilina investigated how teleconnections influence wind, rain, and temperature in the Mediterranean. The region is complex with rivers, land isthmuses, mountains, deserts, and a vast sea in between. If you create a model of the effects of teleconnections, climate forecasts should improve.

“To improve Mediterranean forecasts, Ciarlo` is trying to introduce new chemical data into the regional model.” 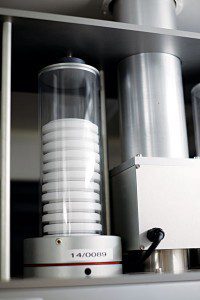 To improve Mediterranean forecasts, Ciarlo` is trying to introduce new chemical data into the regional model. These chemicals are known as Secondary Organic Aerosols. They are produced by chemical reactions that happen in the atmosphere and are difficult to model. Although often overlooked, these compounds change how heat is radiated in the atmosphere (and our own health). For Ciarlo` ‘the hope is that adding this missing piece [to the model] will produce a substantial improvement [in forecasts] while at the same time reducing the demands on computational power’. When this chemical data was plugged into a global climate model, forecasting did not lag and produced more reliable results. Ciarlo` is now trying to replicate this success in the regional RegCM4 model to improve it, helping the group to understand the Mediterranean climate.

The Air We Breathe

Air pollution does not only affect weather and climate patterns but also human health. Hicklin is studying where pollutants come from and how they spread. The pollutants he is measuring include ozone, carbon monoxide, sulfur dioxide, nitrogen oxides, radon, particulate matter, and Volatile Organic Compounds (VOCs). Hicklin uses two sets of state-of-the-art monitoring equipment, ‘one set installed permanently inside an ‘eco-friendly’ Mobile Air Quality Laboratory van, and other set which is mounted on mobile racks. The racks were designed to allow the equipment to be moved to different indoor environments, in order to study how pollution flows in and out of these environments.
Indoor VOC sources are important. Aquilina explains that these sources are as prominent as outdoor sources, and are widely used in manufacturing. Furniture, laminations, cleaning products, paints, tobacco smoking, and others all release these compounds. VOCs are linked to respiratory conditions and illnesses such as lung cancer. Malta has a high occurrence of lung cancer when compared to the number of smokers on the islands. Childhood respiratory problems are also on the rise, so measuring the level of these indoor pollutants is very important. Hicklin’s research could be used to evaluate indoor emission models. These models would help predict how dangerous an indoor environment could be.

A person’s exposure to VOCs is hard to determine. Nonetheless, tests can measure the quantity of these substances in our body. Studying body fluid samples gives one an idea of air quality and helps scientists see which pollutants affect human health. ‘First, we need to identify which are the real risk factors and why we are having this high prevalence of respiratory illnesses’, Aquilina asserts. Air pollution affects our health, but which air pollutants are really responsible for the problems doctors encounter every day? This question is very difficult to answer and is shrouded in misconceptions.

Misinformation and atmospheric science seem as intertwined as a knotted rope. This confusion, Ciarlo` believes, is clouding the public’s perception, thus delaying politicians’ decisions on pressing issues. The term ‘global warming‘ is one example of misinformation about atmospheric science. People assume it means that temperatures will increase everywhere. That is not the case! What global warming refers to is the increase in the planet’s average temperature, which is already happening. It might be that in one place there is a large temperature increase but in another place there is a small decrease. Scientists have moved on from using the term global warming to climate change because the problem is not just temperature changes, but loads of other factors which come into play, such as extreme weather, desertification, and many more. These changes are subtle and difficult for humans to experience within our short life-spans. Scientific data is the only reliable information but unfortunately, facts and figures generally do not resonate with human decision making.

Decisions need to start being taken to limit these dangerous chemical emissions and mitigate the effects of climate change. Polluting our atmosphere pollutes our own bodies. The work at the Department of Geosciences is just one piece in a huge puzzle. We need to start seeing the bigger picture to understand our world and secure our future.