As the ALIVE Charity Foundation gets ready for the next edition of the RE/MAX ALIVE Cycling Challenge for Cancer, Chairperson Nicky Camilleri tells us why, year after year, they continue donating funds towards cancer research.
Words by Iggy Fenech for RIDT.

Every year for the past four years, dozens of cyclists have committed themselves to training for 16 weeks, cycling over 1,000km in just one, and raising a minimum of €2,400 which is donated to cancer research. These cyclists are leaving behind a legacy.\

‘This has always been a very personal matter to me,’ says co-founder and chairperson of the ALIVE Charity Foundation, Nicky Camilleri. ‘Nineteen years ago, I watched my mother succumb to cancer, and since then, I’ve lost many friends and relatives to the illness. It wasn’t until some six years ago, while cycling with my friend Miriam, that I decided to do something meaningful with my life and give back to society at large.’

That was the moment the ALIVE Charity Foundation was born, and within a week Nicky and Miriam—who today still form part of the strong four-person committee—had already recruited three other cyclists. This number would grow to 35 by the time the first ‘ALIVE Cycling Challenge for Cancer’ took place, where the team cycled from London to Paris via Brussels.

Over the past four editions, the Foundation has donated over €300,000 to the University of Malta’s Research, Innovation, and Development Trust (RIDT), money that has so far funded four Ph.D. students—two in breast cancer and two in brain tumours and leukemia. On top of this, ALIVE has also funded an indoor and outdoor play area at the Oncology Department within Mater Dei Hospital. 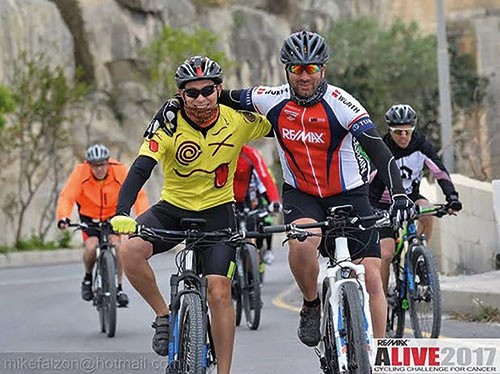 ‘While treatment and proper care are both important factors in the fight against cancer, it is through research that we can aim to advance our knowledge of the disease, which allows us to give better diagnoses and treatments,’ Nicky adds. ‘This investment is building research capacity through opportunities for young scientists to join the research community, and any advancements or breakthroughs that come from that could benefit anyone whose life is touched by cancer.’

In the coming weeks Nicky, on behalf of the ALIVE Charity Foundation and together with the University of Malta’s Rector, will launch the Cancer Research Programme, which will be helping researchers to directly obtain funding towards cancer research.

With just a few weeks to go before this year’s 50-strong team of cyclists take on the challenge of cycling from Copenhagen in Denmark to Warsaw in Poland, the Foundation has already raised a substantial sum through the cyclists and corporate sponsors. Moreover, ALIVE has also teamed up with Malta’s first crowd-funding platform, ZAAR.com.mt, to raise at least another €100,000 for cancer research. At the time of writing, over €70,000 has already been raised.

As Nicky points out, the name of the charity outlines the inspiration behind its projects: ‘Many of us take a lot of things for granted, and we don’t take care of ourselves or our health. Yet, when we suffer from an illness, we all wish we would have done things differently. That’s why the most important thing in life is to remember to live because only then are we truly alive!’

For more information about the RE/MAX ALIVE2017 Cycling Challenge: www.alivecharity.com