You are the staircase 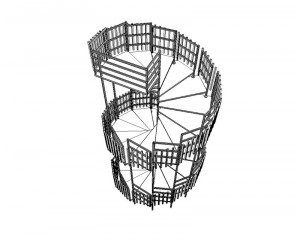 DNA is the stuff of life,” said many famous scientists. The discovery of DNA has revolutionised biology. It proves that all life came from one primordial ancestor, which means humans are very closely related to other animals. DNA supports a reason for sex, needed to make sure we are all individuals with a unique code. DNA is so powerful because its four letters contain a code which, when read, make practically every organism that ever lived. Norbert Francis Attard waded into this maelstrom.

His artwork You Are the Staircase took two twists of a single strand of DNA and magnified its outline hundreds of thousands of times into a six metre metal structure. It was perfectly set on the cross roads between St John’s Street and Merchants Street in Valletta. The structure was based on a spiral staircase inviting any visitors to climb and gain a previously impossible unique vantage point.

The idea formed during a conversation over brandy with Prof. Alex Felice in his living room. Prof. Felice began outlining what DNA is, its significance in the scientific world, and how it has advanced biology and medicine. An extremely enthusiastic Attard asked question after question, but I noticed that the sparks started flying when the images started rolling on Felice’s Macbook. The four colours used by DNA sequencing machines flew up: red, green, blue and black, they became integral in the light strips that swirled around Attard’s artwork — although he didn’t stick to them religiously. Sequencing machine data output results in graphs with elegant peaks, and four repeated letters: A, T, G, C. These DNA letters represent a three-letter code, which relate to 64 different combinations. For example, ATG is a sequence that signals other components to start reading a gene. That gene will eventually be translated into proteins, which form our hair, teeth, eyes and heart. Attard incorporated this into the style and content of the light strips. Unifying everything, three-dimensional artist designs of DNA provided Attard with his elegant swirl. Science was integral in inspiring and structuring the artwork.

In their research, Felice’s team use DNA technology continuously. A former Ph.D. student, Dr Joseph Borg, studied a Maltese family to investigate the disease thalassemia, common in Malta. With an international team of people, he sequenced stretches of this families’ genome to find a mutation in the KLF1 gene, which helped family members cope with the blood disease. If researchers manage to turn off this gene in adults suffering from this disease it would help stop dangerous complications in millions around the world.

Apart from this form of gene analysis and therapy, locally researchers are also using organisms with unique genetic inserts that help their investigations. Dr Mario Valentino uses mice whose neurons shine green when a laser is lit on them (see pg. 27). With this technique, his team can study how stroke develops in humans. Dr Ruben Cauchi uses fruit flies that have had their genetic code modified to study the human muscle wasting disease spinal muscular atrophy (SMA). The mutation causes the flies to develop a disease very similar to humans (see pg. 17). Other scientists are using techniques based on our knowledge of DNA to study cancer. In the future, we might be able to sequence a cancer and give patients a treatment that specifically treats that unique tumour — not every cancer is equal (last year there was an international conference on this issue in Malta). We will also be able to take samples of skin cells, and turn them into fully-fledged organs to  replace failing ones. DNA has given us a bright future full of the technology that usually fills science fiction novels. 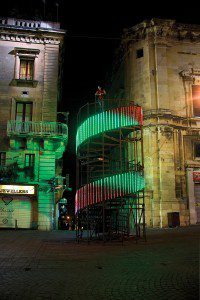 DNA has now become mainstream in the art world. Be warned. There is a lot of gimmicky DNA ‘art’, some pushed by leading magazines. DNA seems to have become a fad. You can send in a swab and receive back a DNA portrait, which is just a technique applied on your DNA giving pretty fluorescent bands separated by size. The method is a very common, and cheap, laboratory technique, followed by some Photoshop colour replacement. The DNA can be printed on t-shirts, posters, gifts, calendars, shoes, and more all for your friends, office, restaurant, or lounge — it overwhelms even this geneticist.

Fortunately, it is not all commercially driven cheap tricks. A two-mile cycle path winds through Cambridge’s beautiful streets created from the colours used in DNA sequencing. Apart from the aesthetic, the path identified a stretch of DNA found in breast cancer patients. Staircases are also quite common. In Florida, USA, a Dali Museum has a 75-foot spiral DNA staircase, while in Strasbourg, France, two DNA helices wind around each other creating an impressive design dominating the interior of a building. Attard’s work differs in many important characters.

By placing a harsh metal structure in the middle of a Baroque city, progress seems to have clashed head-on with tradition. Yet, unexpectedly, many passers-by commented how it seemed a natural part of the city. Some suggested a permanent residence. The artwork also had a Dr Jekyll and Mr Hyde persona. The contrast between day and night is stark. The day’s grey scaffolding was transformed at night when the LED strips sprang to life transforming the art piece and bathing the surrounding square in coloured hues.

The stairs are central to the piece. By climbing these stairs are we simply going nowhere? A criticism on science? Or is it a shared collective experience (6 at a time)? On the other hand, as everyone has a unique sequence of DNA, the staircase is a unique journey of discovery of the city and upon introspection: ourselves.